THE GIFT OF ROSES

Regular followers of Roadside Ikebana will have realised that life has been busy here on the southwest coast of Victoria. I am still in catch up mode and now want to draw your attention to a recent workshop of the Victorian Branch of the Sogetsu School. The workshop was lead by Thea Sartori, two weeks ago on the 16th May; you can check the photos here, on the theme Three Simplified Arrangements * .

For this week's ikebana, below are two photos of arrangements using roses that I made some time ago.

The first was an experiment in making a vertical freestyle work based on the idea of a 'double shin'. I have not previously used a tall vase for this arrangement and in this case have massed seven orange roses between two vertical lines of pomaderis paniculosa * , a shrub native to this area and growing in our garden. The vase is by Graeme Wilkie *. 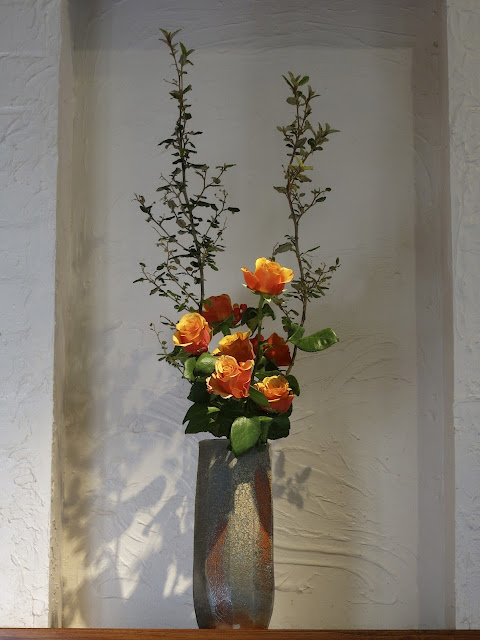 This is not a correct 'double shin' arrangement because the long lines are too dissimilar in length and mass compared, for example, to the photo below originally posted in February 2012 . 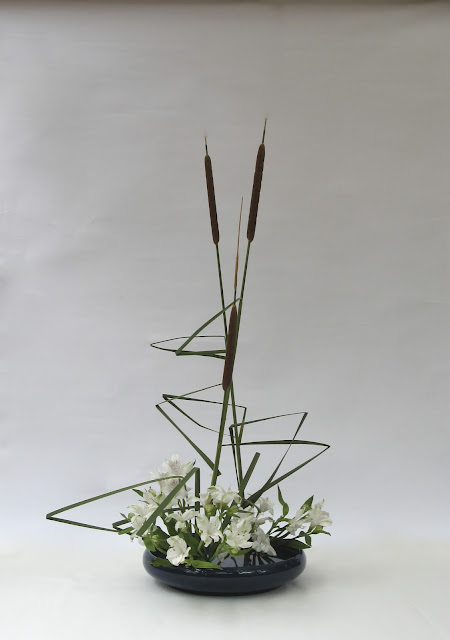 The second arrangement is an asymmetrically placed mass of voluptuous pink roses in a shallow bowl made by Phil Elson * . 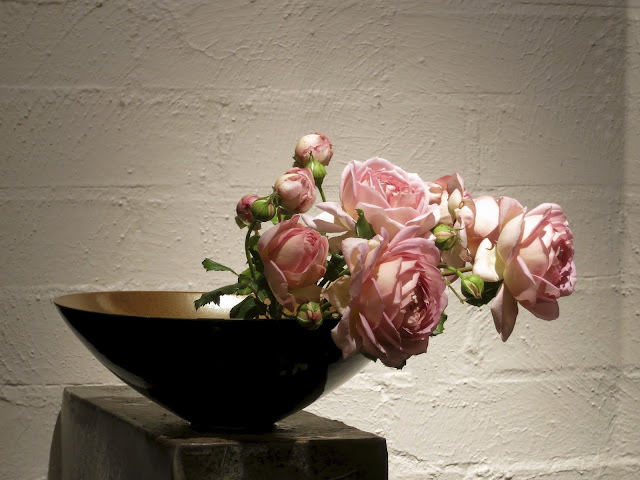 Greetings from Christopher
29th May 2016

Posted by Christopher James at 5:57 PM No comments:

INSTALLATION at the WARRNAMBOOL ART GALLERY

This weekend, 21st and 22nd May, I am in Warrnambool (in south-west Victoria at the end of the Great Ocean Road) where the regional Art Gallery has an auditing project and exhibition in progress.

I have been invited to create an installation and have chosen a small oil, the second study for, The Arrow Carriers * , by the Australian artist Jeffrey Smart. 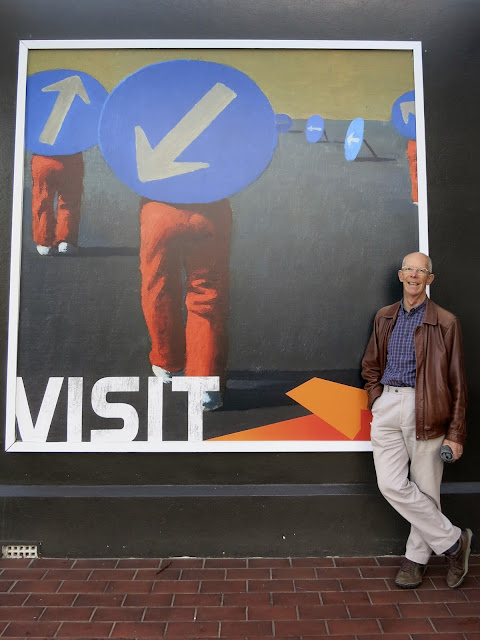 When I arrived here I discovered the painting had been chosen as the publicity image for the gallery.

Jeffrey Smart’s work usually focuses on the geometry of manmade structures. He refines his work by removing extraneous elements and creating pared back, surreal images, usually with dissociated-looking human figures in them. I titled the installation Somewhat Bent, referring to Smart’s memoir Not Quite Straight. In the installation the manmade elements are receding and being dominated by the elements of the natural world.

The next couple of photos are of the preparation of materials. I used painted stems of dried agapanthus from which I created geometric forms ... 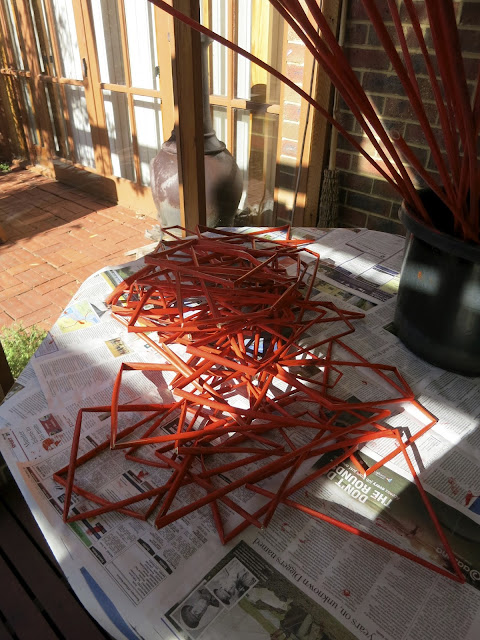 ...and dried branches of tortuous willow. I also created replicas of the directional arrows in the painting. 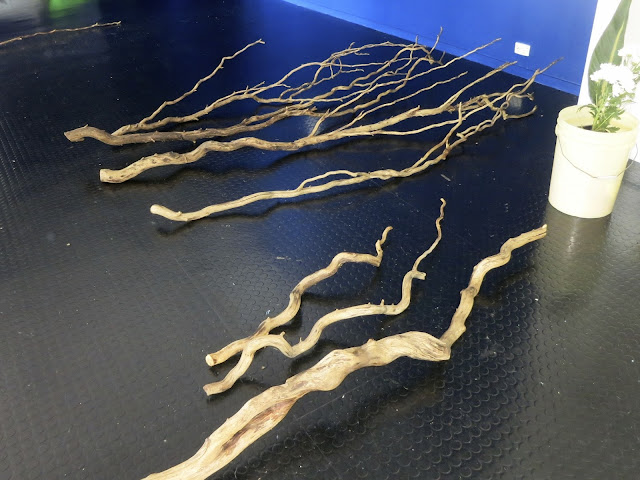 I was able to select a site for the installation and discovered an almost invisible shelf, 2.8m above the doorways in the foyer that lead into the two principal galleries. The ceiling of the foyer is a gable and is indirectly lit by a hidden window above the shelf. 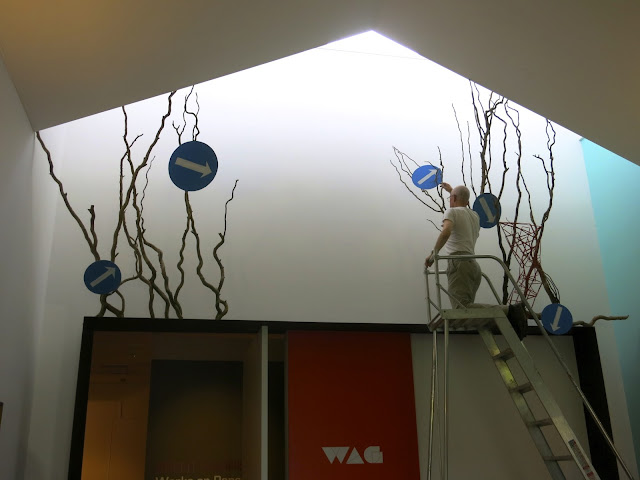 The scissor lift didn't work so I used a very tall step ladder when fixing the materials on the shelf. 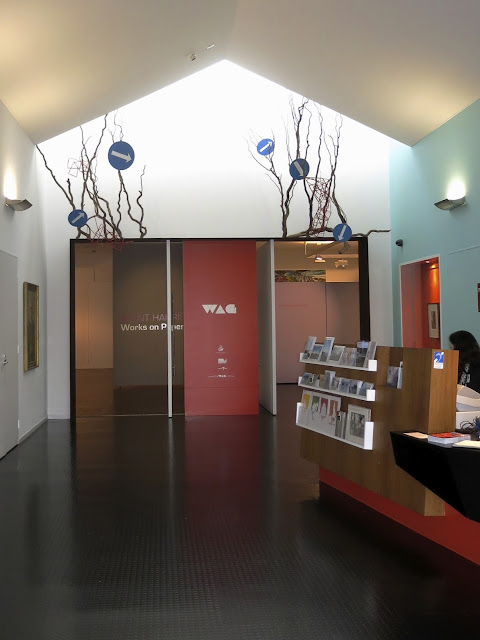 This shows the general view from the foyer. The permanent collection is being re-hung in the gallery on the right, as indicated by the arrow projecting below the lintel. 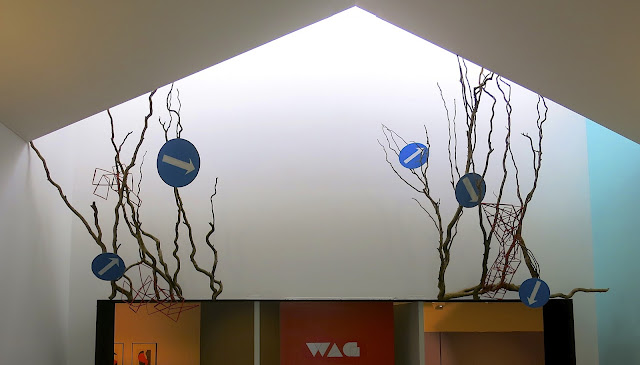 I deliberately had elements of the installation project below the lintel and above into the light well. Because the branches were leaning forward they did not cast shadows and the wall behind seemed to disappear into infinity. 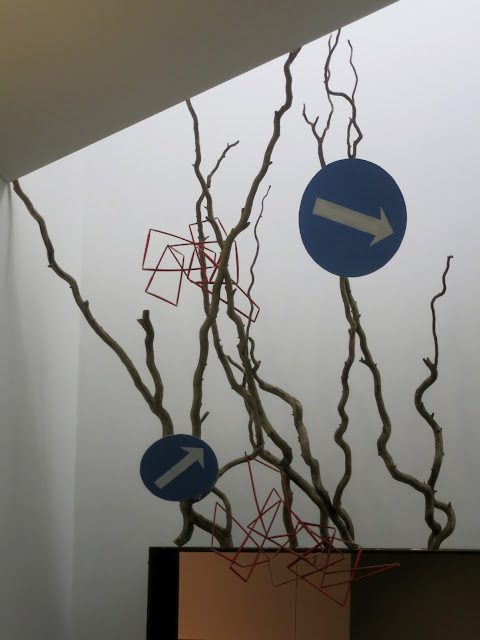 Detail of the left... 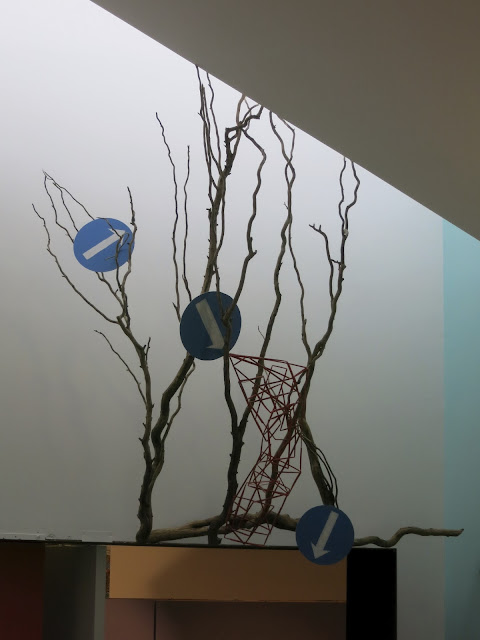 ...and righthand side of the installation.

For those of you who use Facebook you might want to check the gallery's page at: Warrnambool Art Gallery * .

I would also like to draw your attention to the photos from the Ikebana International * workshop in Melbourne held on 16th May.

Greetings from Christopher
22nd May 2016

Posted by Christopher James at 8:07 PM No comments:

Last Monday saw the change-over for the second week of the Victorian Sogetsu Branch members' exhibition.

This week another of my students from Geelong, Christine Denmead, exhibited her work. I was surprised to discover, when she came to discuss her plans with me, that we both had independently decided to use ornamental grape vine leaves with otherwise bare branch materials. Fortunately my work was exhibited in the first week, so that we did not have two works with similar material close to each other in the same space. 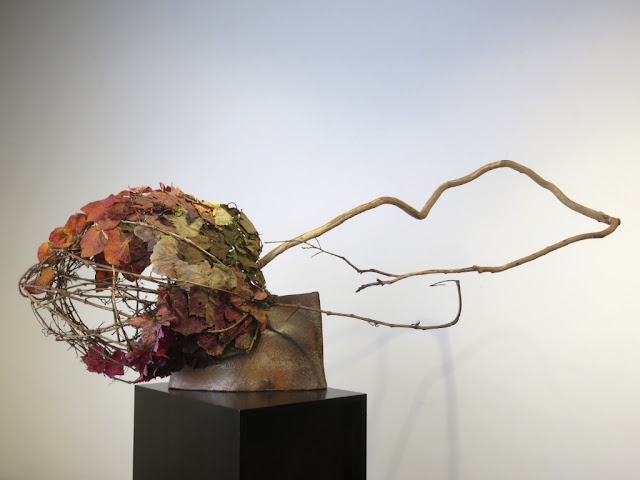 In her arrangement above, Christine has used pressed and dried grapevine leaves on a globe of vine contrasted with a branch of eucalyptus, in a vessel by Graeme Wilkie.

Other images from the Annual Exhibition * have now been posted on the Victorian Branch website. 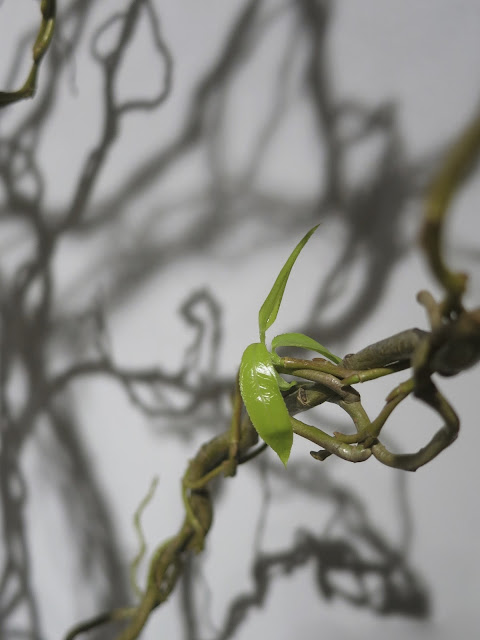 When I returned home from the exhibition, having taken down my work, I re-set it in a different vessel, also by Graeme Wilkie. I was intrigued to notice that the stripped tortuous willow had begun to sprout new leaves. 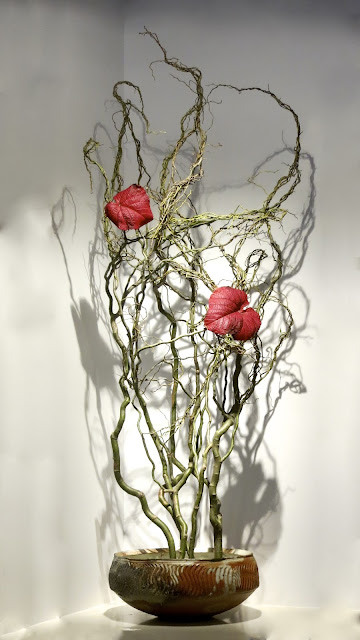 Because the dried leaves I had used in the exhibition were damaged in the removal process, I added only two fresh leaves in this new version of the work.

A couple of weeks ago I was delighted to receive my tickets for the Ikebana International Congress to take place in April 2017 in Okinawa. I look forward to the possibility of meeting some readers of this blog there.

Greetings from Christopher
14th May 2016

On Monday last the Annual Member's Exhibition of the Victorian Branch of the Sogetsu School of Ikebana was opened. The event is being held over two weeks in the East & West Art * gallery that specialises in oriental antiques.

Three of my students are participating in the first week of the exhibition, including... 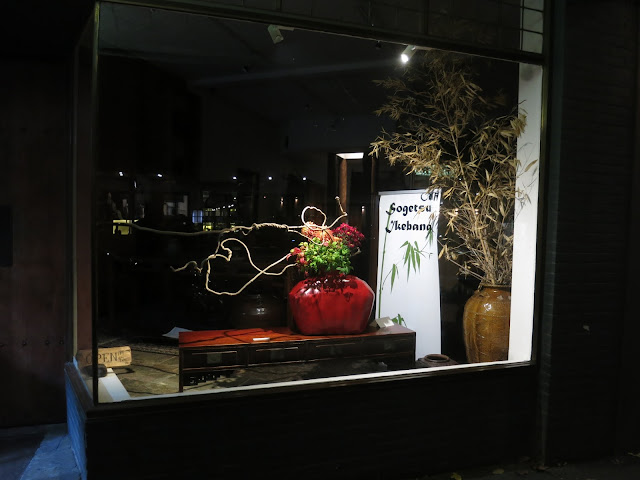 ...Helen Quarrell whose work, above, is in one of the front windows of the gallery; 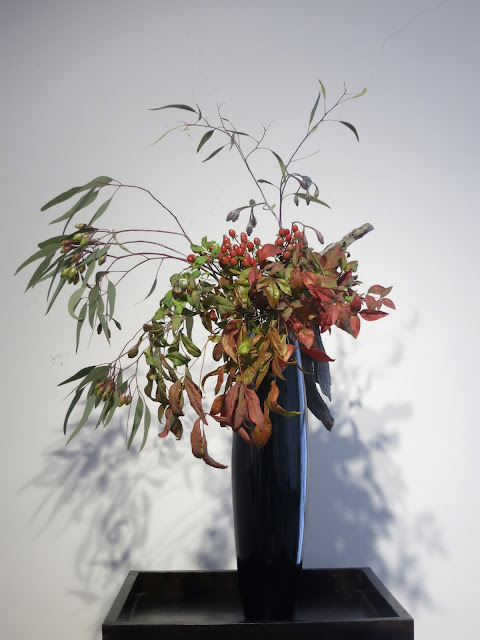 ...Marcia Lamrock, who made this nageire arrangement using flowering eucalyptus, nandina and some dried wood which is just visible on the righthand side peeping from the back of the work; and 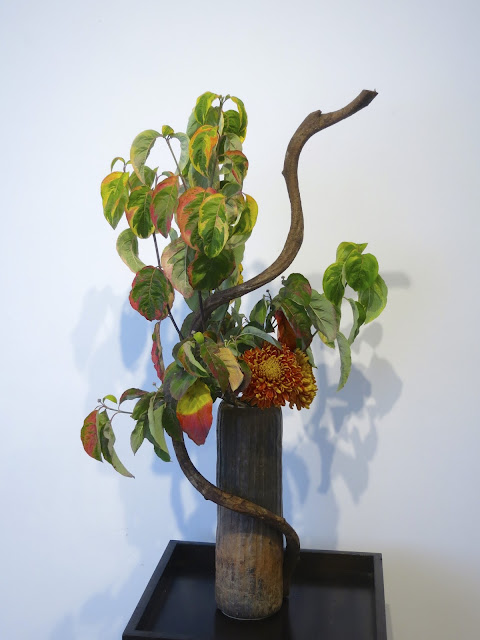 ...Ellie Welkamp, who used beautifully coloured dogwood leaves, chrysanthemum and a length of vine that spiralled around her vase.

I was inspired by the memory of some red-orange coloured tortuous willow that
Mr Umemura used at the recent workshops. However, I was not able to acquire any of that kind, instead I found some of the more common olive green variety. My idea was to make a hollow column with the willow and then mass dried red leaves within it from the grapevine in our garden. 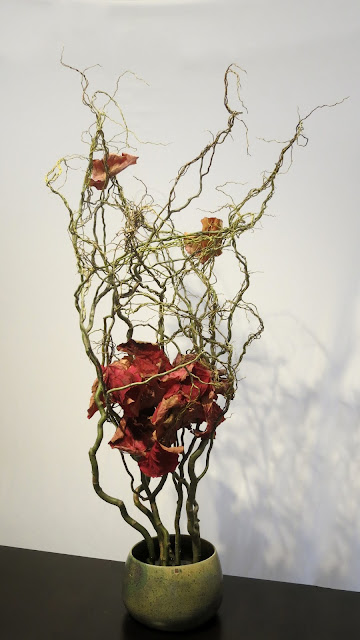 As you can see, I extensively entwined the willow on itself and was able to create a mass with the leaves suspended above the vessel. In the completed arrangement the olive-green on the willow beautifully complemented the ceramic bowl by Isabel Wang * . The Sogetsu Branch website has more photos * from the first week of the exhibition.

Greetings from Christopher
6th May 2016

On Saturday this week I conducted a workshop for Ikebana International in Melbourne. The participants brought an offering of materials and a vessel for one arrangement. Then each person, in order of their arrival at the venue, was asked to choose one of the offerings to make an arrangement. This meant they had to use unfamiliar vessels and materials, and had to improvise their design.

I put myself last in the selection queue and found a beautiful handmade ceramic suiban, a selection of yellow chrysanthemums and some foliage known locally as 'Forest lace' * . This is commercially grown and has straight brown stems with very lacy-green foliage. An on-line research revealed that this is an Australian native shrub in the Stenocapus genus. Perhaps the best known member of this genus is the spectacular rainforest 'Fire Wheel Tree' * .

Among my materials were four stems stripped of their foliage. At first I thought, what am I supposed to do with these? Then I thought again, realising that the stems could be used to brace across the suiban, allowing me to make an 'abstract' style work emphasising the colour and textures of the materials. 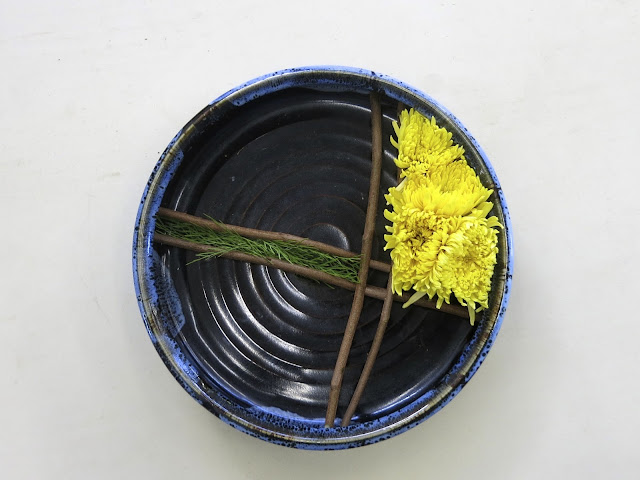 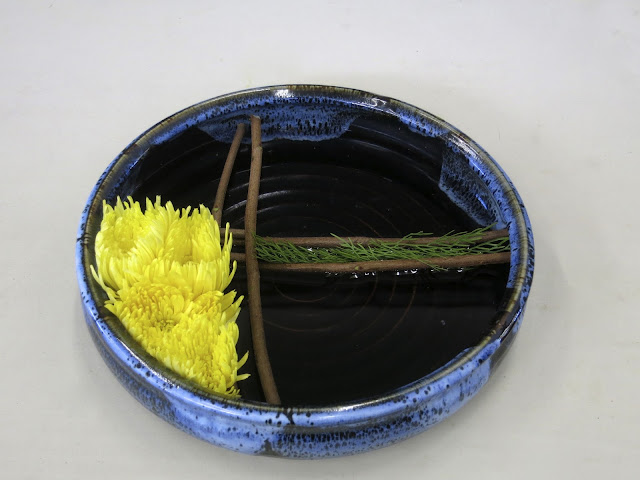 This second view more accurately shows how the work looked on the table. Although I must admit the overhead view is somewhat more dramatic. More photographs can be seen at I.I. Saturday workshop * .

I would also like to draw your attention to
on-line postings by the fifth recipient of the Norman and Mary Sparnon Endowment Scholarship, Sandy Marker * . Sandy is a teacher from Sydney and, as the scholarship recipient, is currently spending three months at the Sogetsu Headquarters.


Posted by Christopher James at 1:24 PM No comments: