FORMALITY and A LITTLE HISTORY

Two weeks ago I attended a lecture at Monash University given by Dr Osamu Inoue, an academic from the Kyoto University of Art and Design. The event was organised by Dr Shoso Shimbo whose student Angeline Lo made the welcoming flower arrangement below. 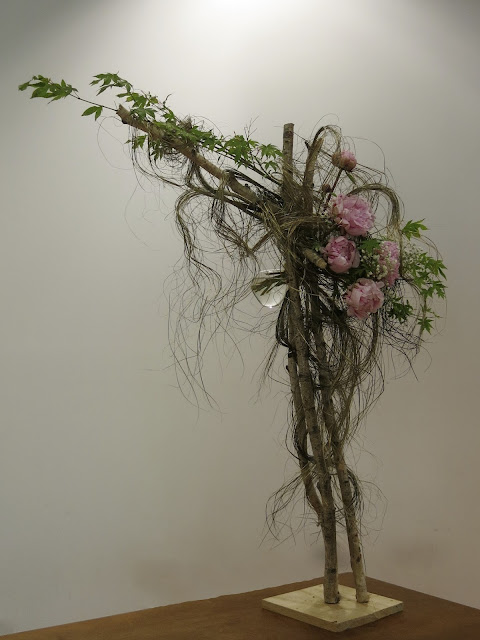 Dr Inoue spoke about the historical development of Ikebana, tracing the evolution of rikka from both Shinto and Buddhist aesthetics and practises. He explained that rikka developed as a highly structured formal style used in ritual and religious contexts and that nageire developed as 'free' or 'casual' style.

I was interested that he described seika as an intermediate style, that grew out of both the rikka and nageire styles, and that it was more suited to domestic environments. Examples of rikka and seika have been included in the  Ikebana International Melbourne annual exhibitions of the last two years that I have curated. 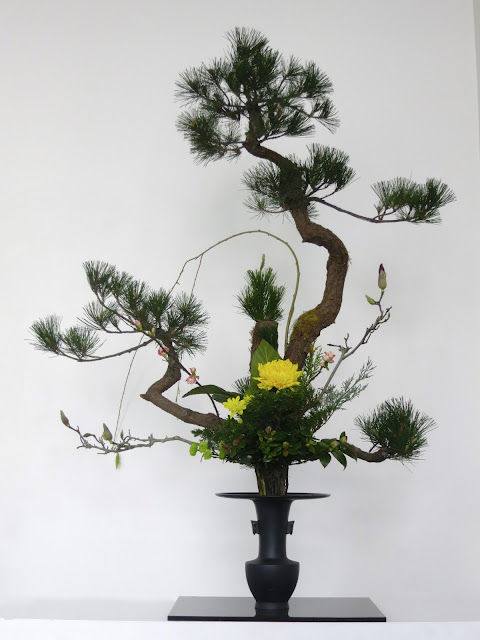 This rikka was made by Yukako Braun of the Ikenobo school... 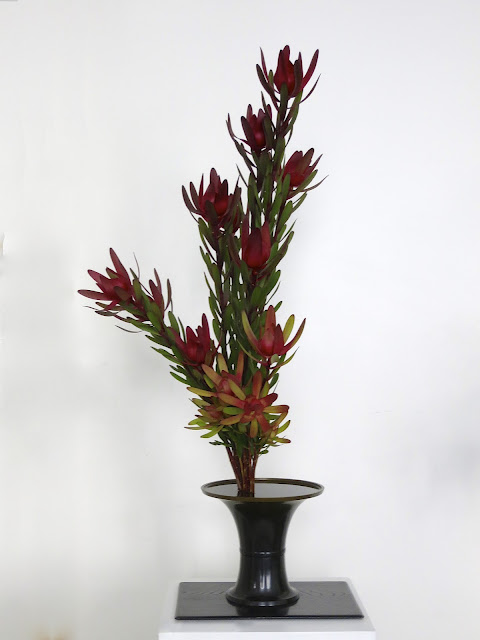 ...and this seika by Pascale Tremblay of the Shogetsudokoryu school both in the 2015 exibition.

A few weeks ago we had a visit at home from Jason Smith, the Director of the Geelong Art Gallery. In honour of the occasion I made this contemporary ikebana arrangement which has some qualities of formality, being upright and with the leaves facing forward rather than naturalistically arranged.

This arrangement fits the Sogetsu curriculum exercise of 'Showing lines at the base'. I have always thought this particular exercise in the curriculum owes something to the requirement in rikka and seika to have all the materials arising in one column from the vessel. 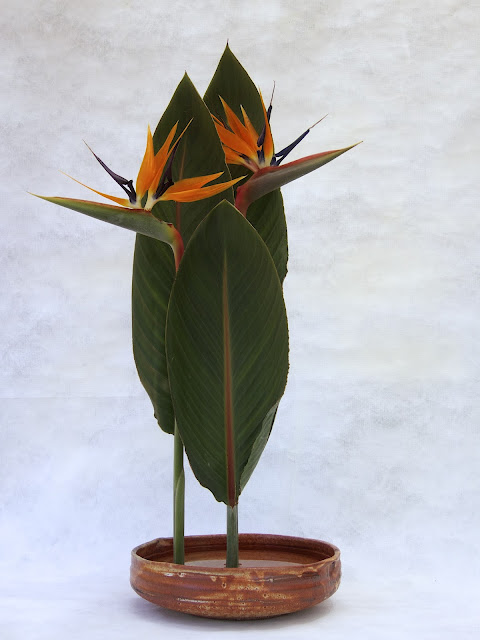 The strelitzia leaves were given to me by my student Val, and the flowers are the first of this season from our garden.

In early October I posted a photo of a calistemon flowering in the garden. Since then many of these, often vibrant, 'bottle brush' * flowering shrubs have become very conspicuous along the roads where they are commonly planted as street trees. They are one of many Australian plants that have long fillaments or stamens and very small, often modified, petals. In this case the flower spikes surround the branches, creating a 'bottle brush' effect. 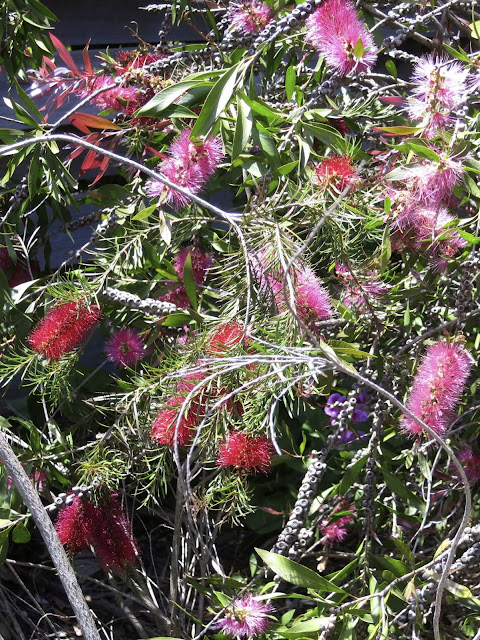 In this photo there are two plants, one with red and the other with pink flowers. 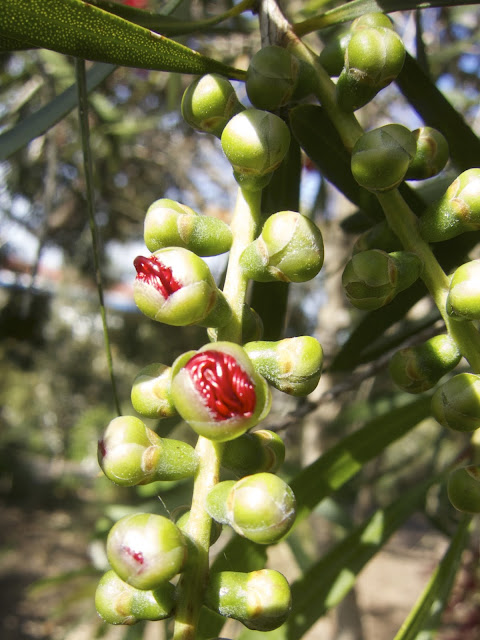 The buds just beginning to open and the filaments to unfurl. 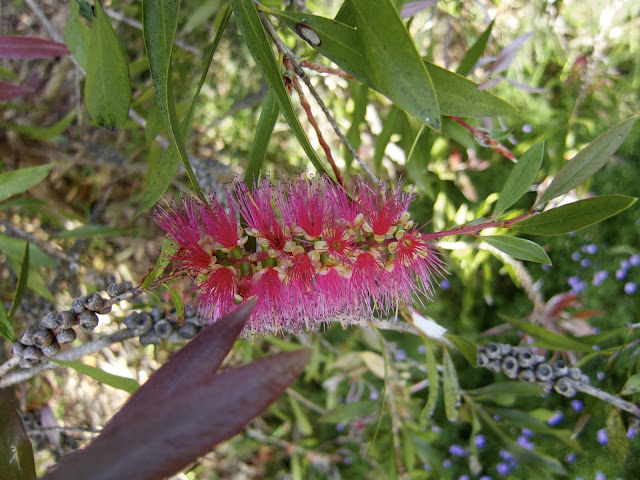 A fully opened flower with seed capsules from the previous season to the left of the flower. 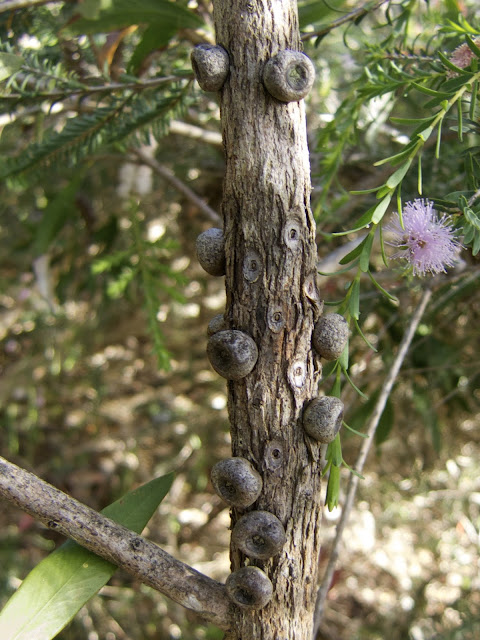 This stem is several years old and some seed capsules still remain waiting for the right moment to release their seeds. 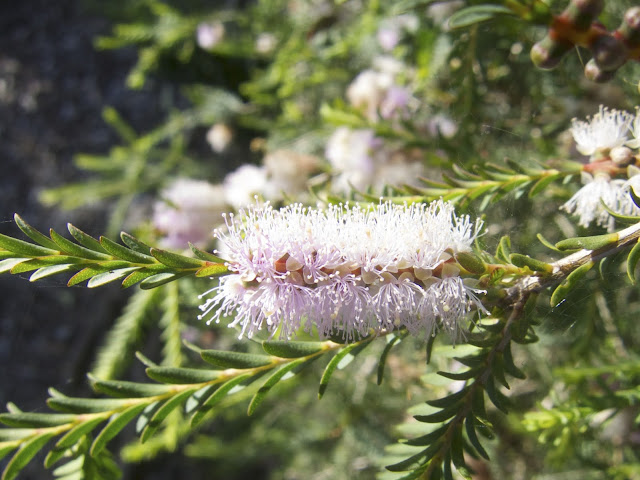 The flowers in this photo of a related melaluca are tiny, only 2cms long. After the flowers have formed the branch continues to grow from the tip, quite often dividing into several new branchlets. 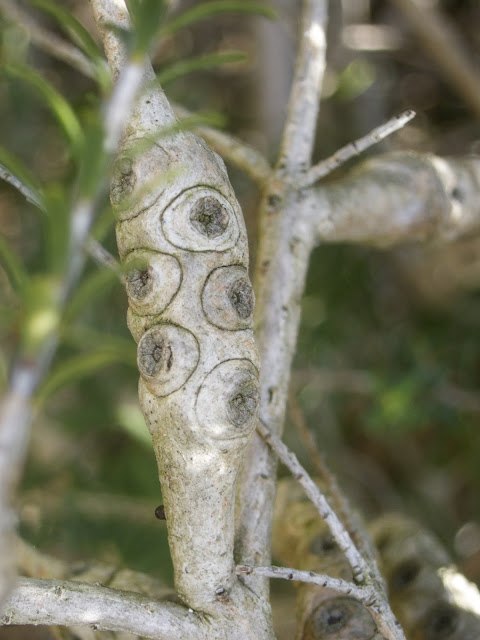 These seed capsules, on the plant shown in the previous photo, look as though they are being absorbed into the stem. 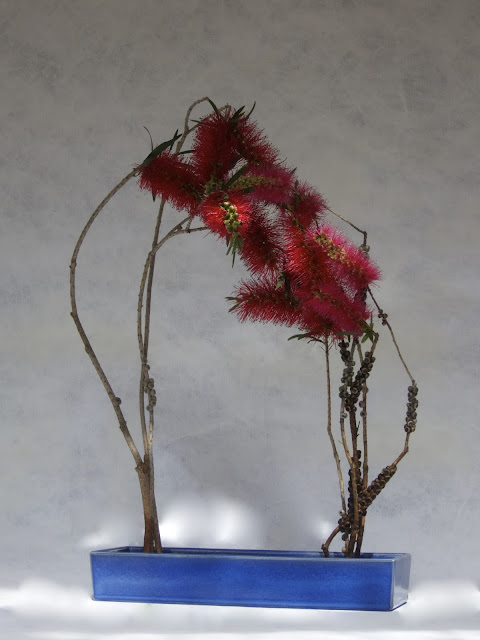 In this week's ikebana I have massed the flower heads and stripped almost all of the leaves to reveal the lines of the branches and seed capsules from previous seasons. There are flowers from two different bushes used in this arrangement. 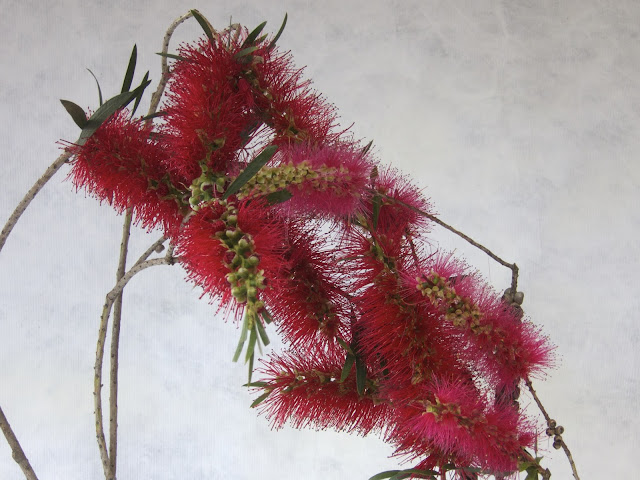 I took this final photo when I realised that the different colours were difficult to discern in the previous photo. In the middle and to the lower right side of the mass some of the flowers are a soft pink while the others are a clear red. It was much more apparent to the eye than in the photo.

Two weeks ago I attended the final meeting for this year of Ikebana International Melbourne *, for which the theme was a somewhat early Christmas. Click on the link to see photos from the meeting.

FLOWERS (AND ANIMALS) WITH THORNS

The Spring weather in this part of the world continues to be highly variable, as usual for the time of year.

On Wednesday it was warm and sunny and to my delight I noticed this quiet and very shy visitor while I was sitting on the couch in the living room. 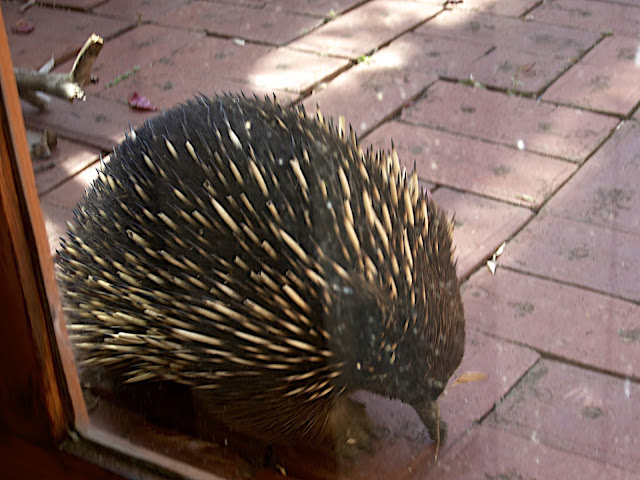 One of our neighbours refers to this charming creature as 'your echidna'. Which, of course, is not true; but it is a fairly frequent visitor to our garden. This is principally because we have no grass, only leaf mulch, which makes it easier for the echidna to forage for ants and other insects. 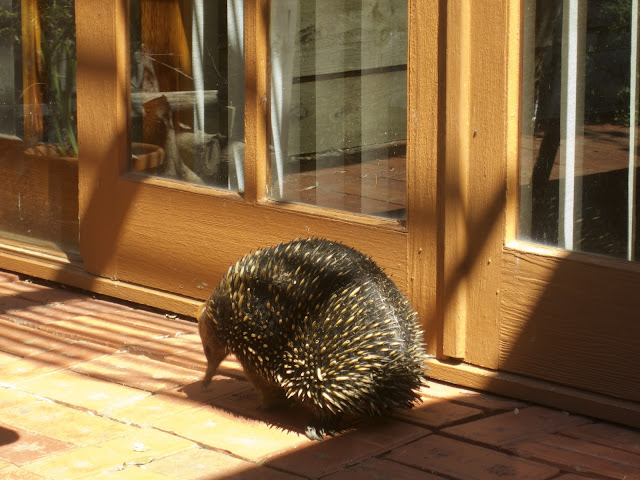 Which is precisely what it was doing between the gaps of the brick paving. We do not often see the echidna as it usually comes into the garden at night and it is only later that we find the holes where it has been digging. 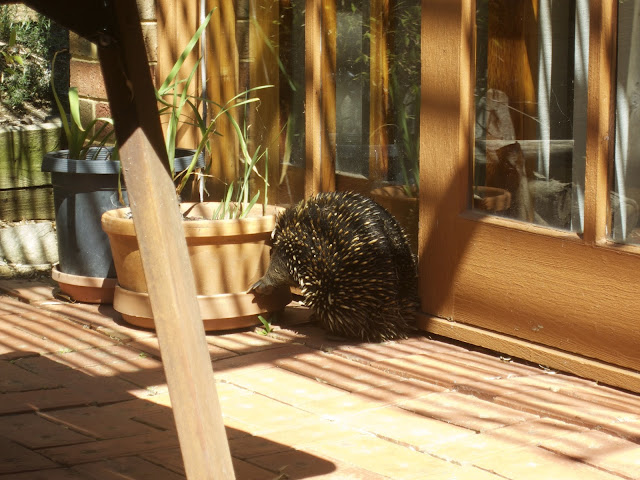 Here the echidna * is drinking from the tray underneath the pot of irises I was recently given by my ikebana colleague Emily Karanikolopoulos.

On Monday this week I attended a Sogetsu Victoria workshop * lead by Elizabeth Angell, photos of which are on the website. Then on Tuesday, at my regular class with Elizabeth, our subject was 'roses' with 'any other material', giving us a free choice. It was interesting to me that the three senior students at the class, without prior discussion, chose to contrast the delicacy of rose petals with dried materials. 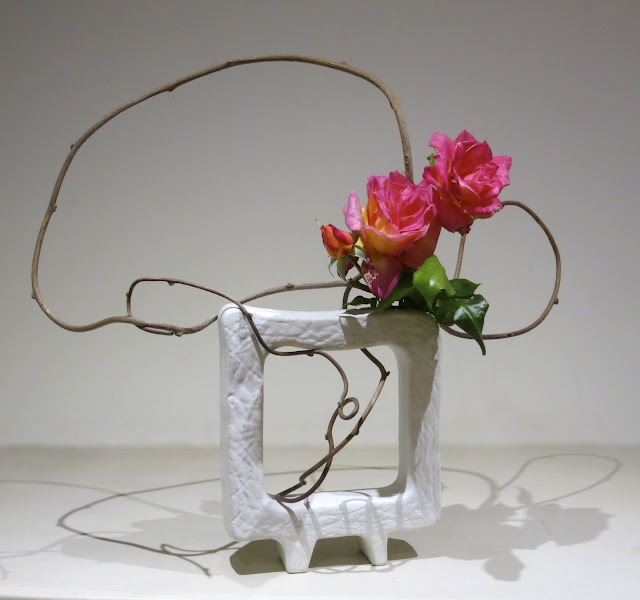 Swan used vine with her rich pink roses in a contemporary vase. 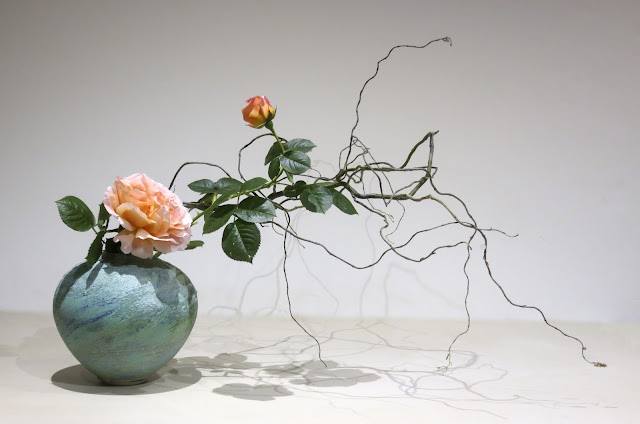 Dianne used tortuous willow and an orange rose in a turquoise and blue streaked vase. 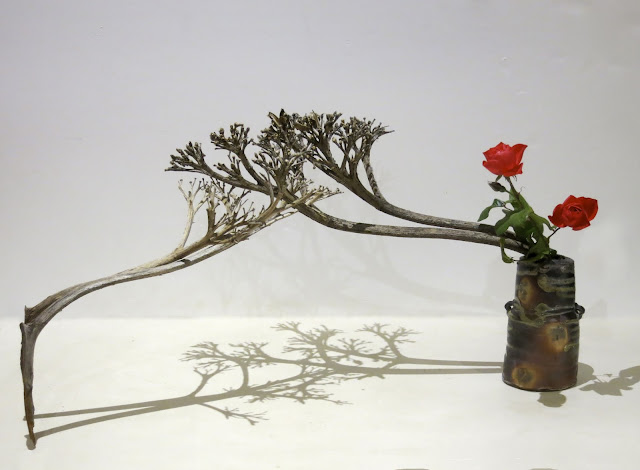 I used red roses with dried agave flower stems in a wood fired vase by Ian Jones of Old Saint Luke's Studio * . My ikebana also met the criteria for the exercise of 'incorporating the area in which the arrangement is placed'. I was also interested to see the pattern of shadows on the table top.

* Click on the blue text for further information and to see photos.
Posted by Christopher James at 1:45 PM No comments:

On a walk today I noticed that the native Clematis (C. microphylla * ) had entered its seed-head-forming phase. At the end of August I posted some photos of flowering masses over bushes on the Torquay cliff-tops. 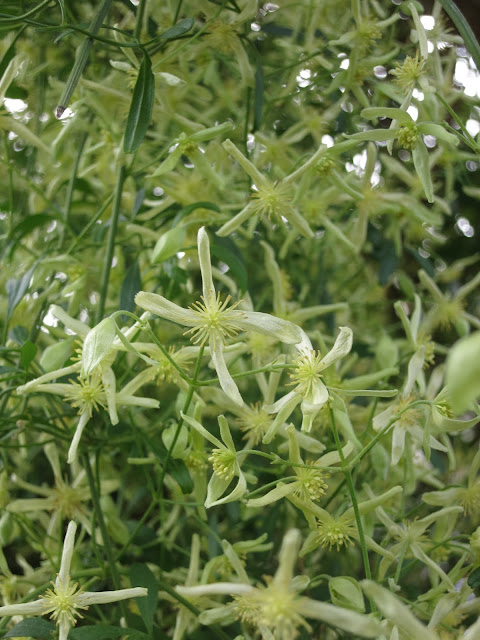 This is how the small flowers looked at that time. 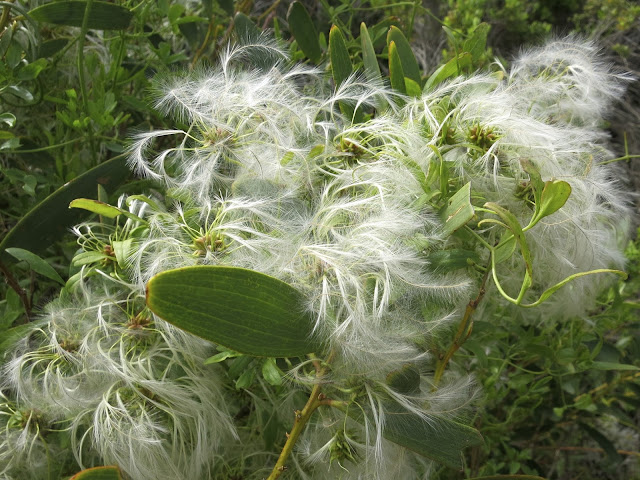 Now, two months later, the seed-heads have started to form masses of silvery balls. These will eventually dry out and be born away by the wind, spreading the seeds far and wide. 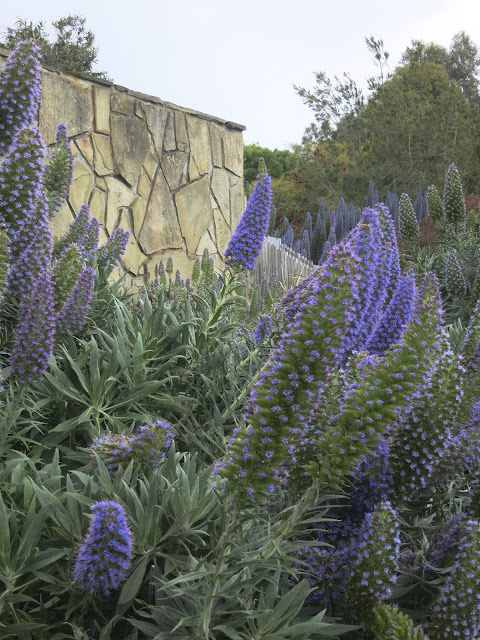 On another walk this week I noticed a wonderful collection of Echium candicans * that are planted along the roadside by one property owner. In our garden, a large Echium has finally come to the end of its life. However, its small seedlings appearing around the garden are being encouraged, if they are not crowding other plants. 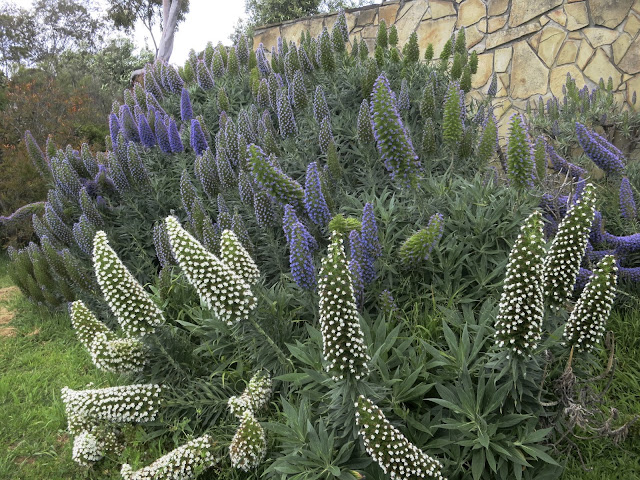 Because these are mediterranean plants they flourish in our climate and consequently are at risk of becoming a pest weed.

On the same walk I was astonished to find another exotic, a garden-escaped iris. Irises are a plant I have failed to have any success growing because of the dryness of our soil. 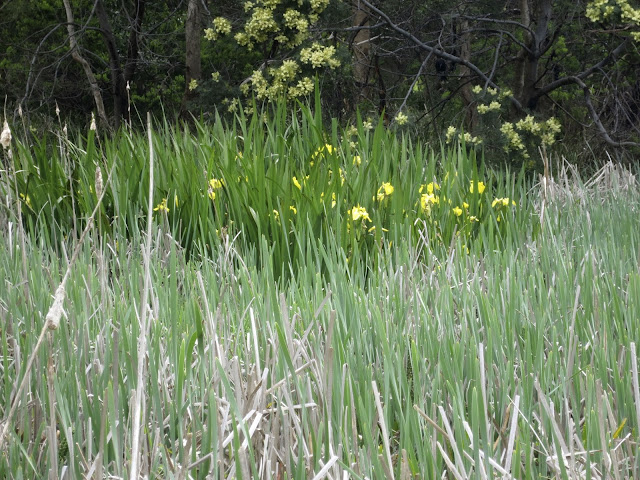 However, here it is flourishing in the bed of the intermittent creek that runs behind our house. I hope it survives because in Australia it is impossible to buy iris leaves from florists in the kind of quantity that ikebana requires.

Coincidently, in the same week my colleague Emily Karanikolopoulos has generously shared bulbs of her irises with other ikebanists, with instructions to grow them successfully in pots(!). This is a great relief as irises are the subject of one of the lessons in the soon-to-be-released Sogetsu Text Book 5. 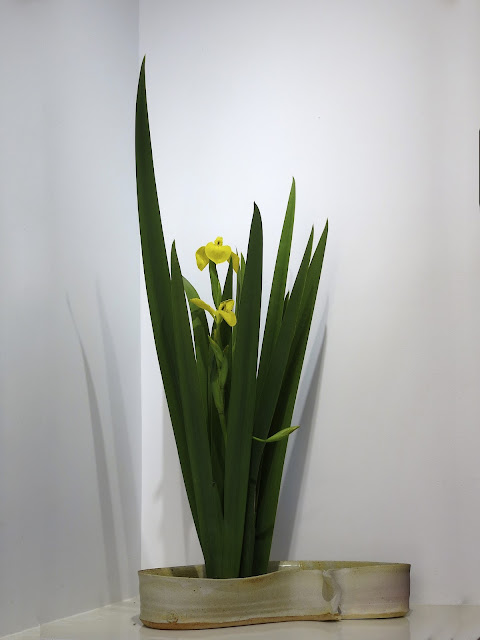 Having found the irises in the creek I made the freestyle ikebana above, following some of the principles I had been taught at the Sogetsu Headquarters in 2011. The unique suiban is by Graeme Wilkie of Qdos Gallery *.

Posted by Christopher James at 6:02 PM No comments: