In recent weeks some of my students had exercises that included or resulted in the creation of mass. I was interested to see the variety of ways mass can be created and thought I would share a couple of examples with you. 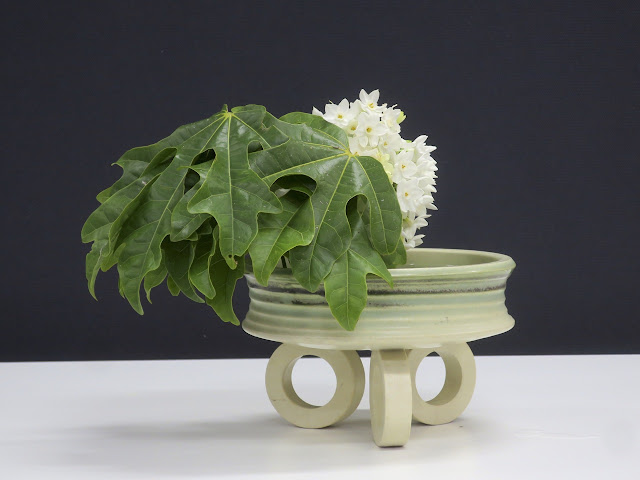 This first example is by Tess and is the text book 3 exercise of 'Massed expression'. Tess has used the leaves of Brachychiton Acerfolius, commonly known as the Illawarra Flame Tree, and gently interwoven them to make an abundant mass spilling over the side of the vessel. Peeping from behind is a second mass of Paper Narcissus, narcissus papyraceus. 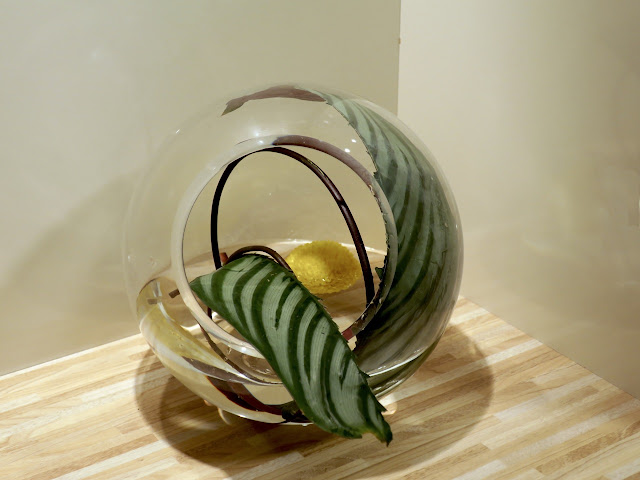 The next example is by Helen. The exercise I set her was 'Using Glass Vessels' from Book 5 of the Sogetsu curriculum. She has used just two leaves and a yellow 'Pompom' chrysanthemum. Arranging inside a glass vessel is difficult because, among other things, the materials often look much bigger. Helen has skillfully reduced the size of these Prayer Plant, maranta leuconeura, leaves by cutting them in half down the length of the central vein. When I looked carefully at her work it seemed also to be an example of an arrangement incorporating line and mass. 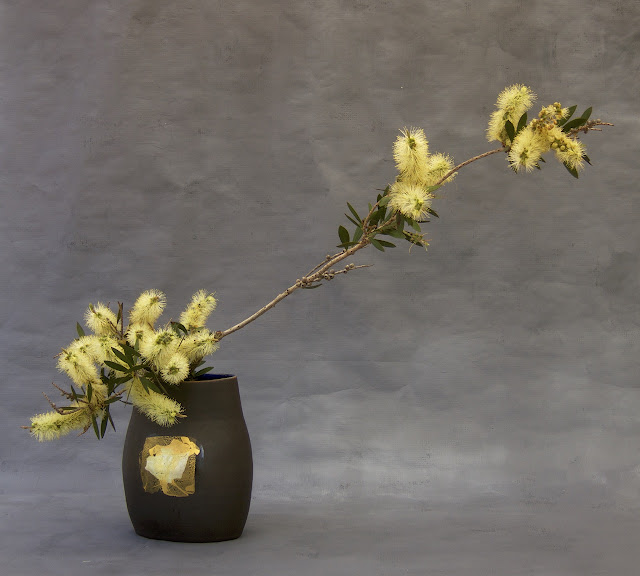 On the theme of mass and line here is an arrangement I made in the early Spring of last year. I have used a creamy-yellow Callistemon from the garden. The black vase by Greg Daly has a gold and silver leaf decoration that accentuates the flower colour.

We have just passed mid-winter's day this week and I thought I'd remind you about the other end of the year. 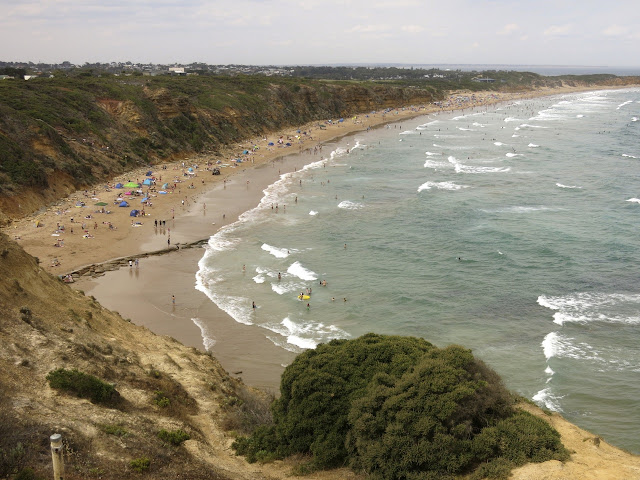 This photo of the beach was taken at the beginning of January. The next one was taken last Sunday. 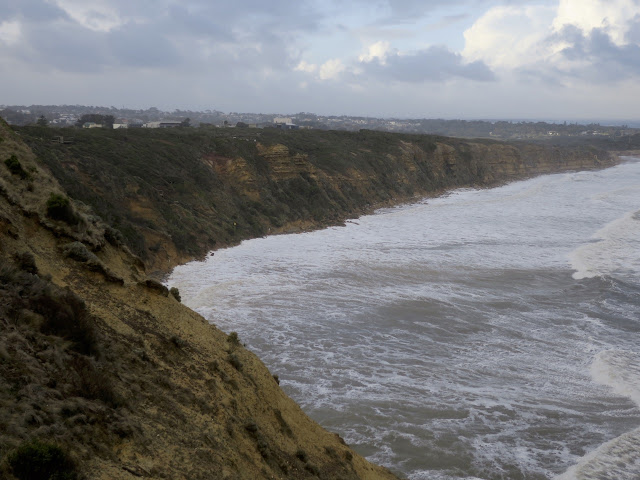 We had strong southerly winds and the tide was high. 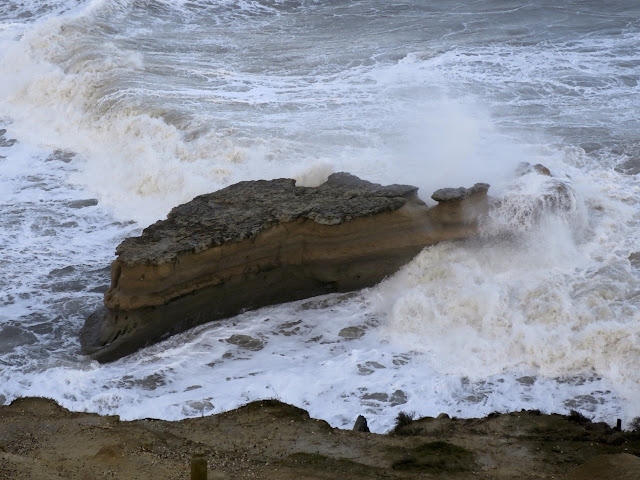 This is 'Bird rock' at the western end of the beach. It is about 4 metres high. In the summer people leap off the right-hand tip into the deep pool below. 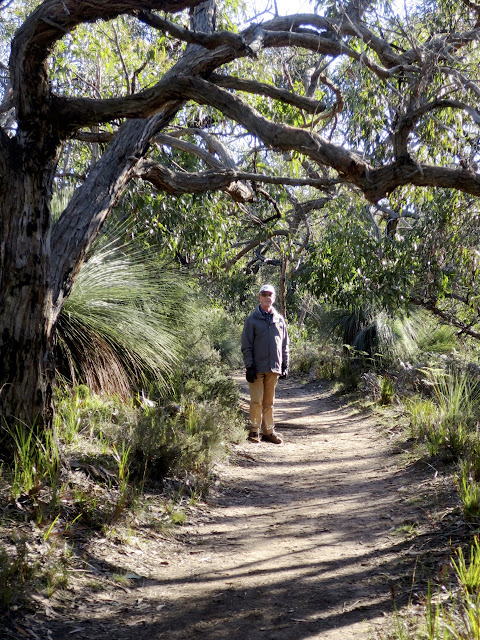 Mid-winter's day was bright and sunny so Laurie and had a walk in the near by nature reserve, Iron Bark Basin. Notice that he is wearing thick gloves, in spite of the sunshine. 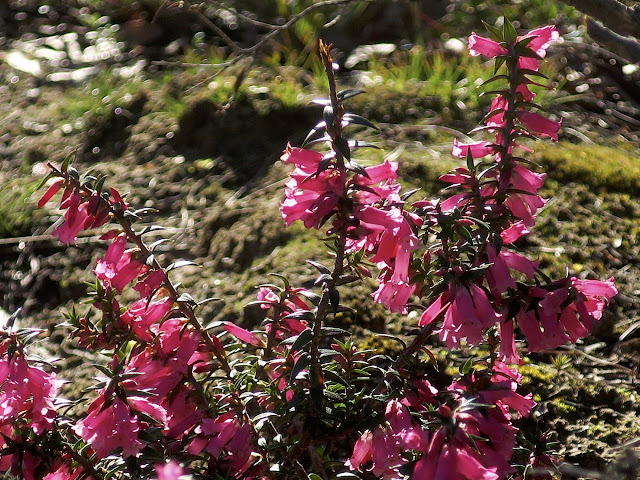 We were delighted to see this clump of Pink Heath, Epacris Impressa, the floral emblem of the state of Victoria. 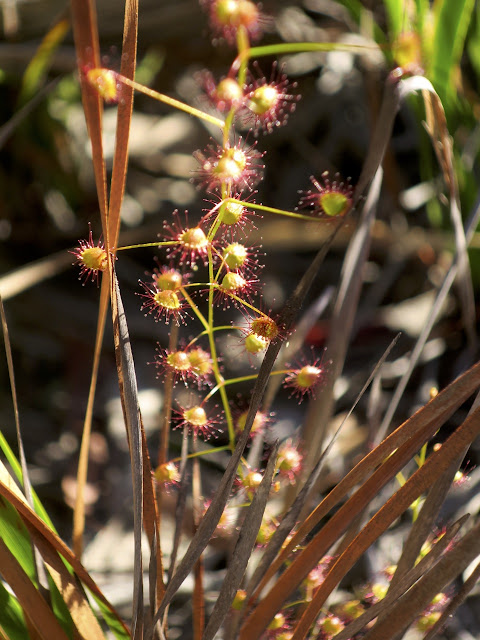 This is one of two carnivorous plants that grow locally. I think this is drosera peltata, subspecies auriculata. A tall-growing stem bears many round 'ear-like' disks with filaments that produce sticky 'sun dew' which is attractive to insects that become caught and then absorbed by the plant. 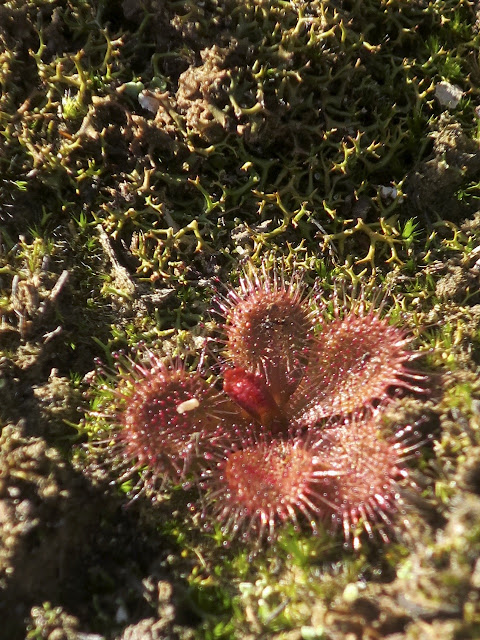 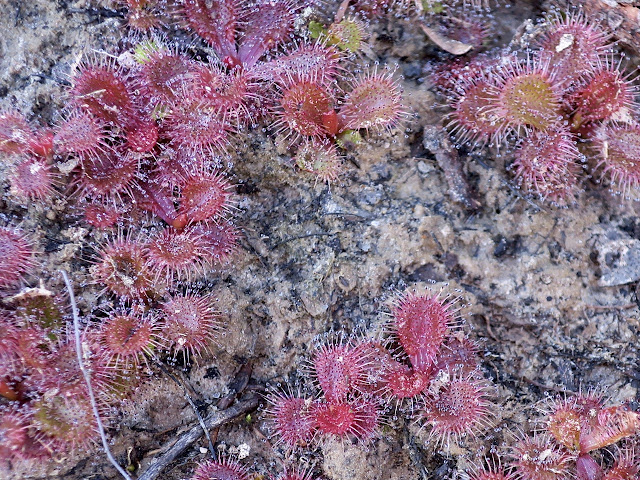 ...which often grows in colonies.

And so to ikebana. On Monday I attended a Sogetsu workshop given by Emily Karanikolopoulos on the subject of techniques for working with umbrella grass, cyperus alternifolius, stems. I have this plant growing in the pond in the conservatory as it is 'semi-aquatic'. The stems are certainly useful in ikebana when straight lines and interesting angles are desired.

Emily showed us how to wire the stems to keep them together to make a surface out of parallel lines. It was a slow process and the vase I had at the time was too big for the triangular structure I had made. 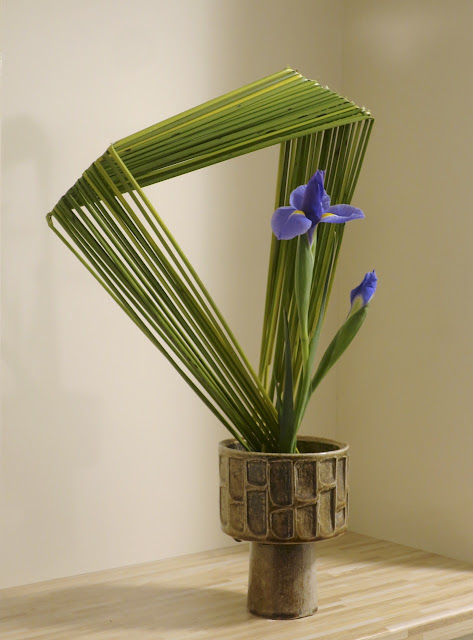 I therefore re-assembled and finished off the arrangement at home, after the workshop. Here is how it looked in a compote-style ikebana vase with the addition of two iris flowers.

More photos are to be seen at Emily's Umbrella Grass workshop.

Posted by Christopher James at 10:18 PM No comments:

A couple of days ago we walked along the Torquay Surf Beach when the tide was higher than usual. The southerly wind added height to the waves and the day was bright but cold. 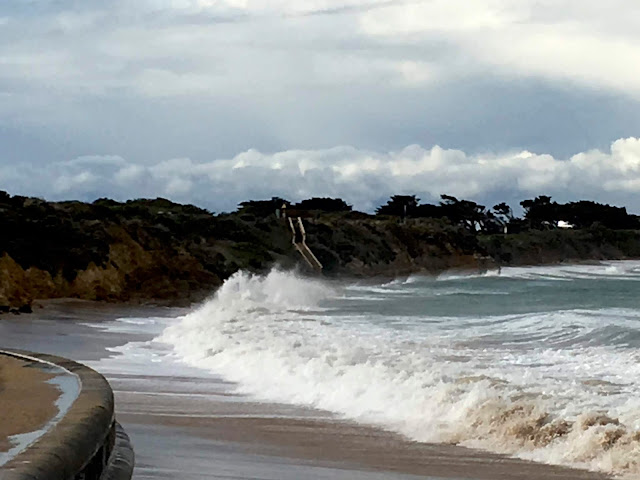 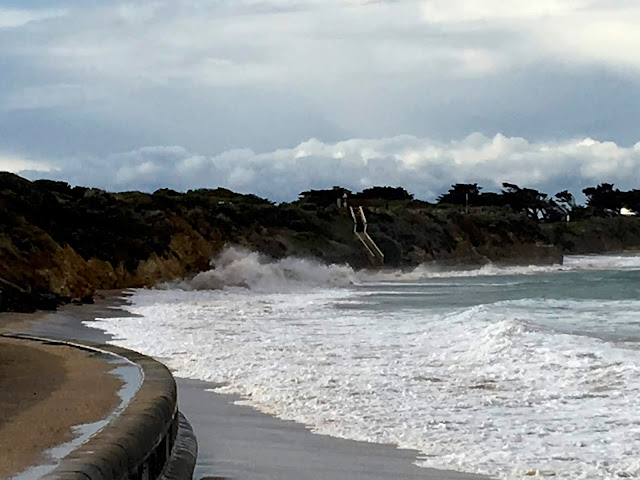 The weather has turned very wintery. Last night we could not avoid noticing the gale-force winds and intermittent rain squalls. So I was very pleased that I had done some pruning in the garden yesterday in the morning.

The Cecil Brunner rose and the hydrangeas have been reduced to sticks. However, I am sure they will bounce back in the spring. The hydrangea had one small, late-flowering, pale blue/mauve bloom and some very beautifully coloured leaves. The strong, but light, stems with autumnal leaves looked like good ikebana material. I decided to use them in a vase with lines in shades of blue and a rich rust red. 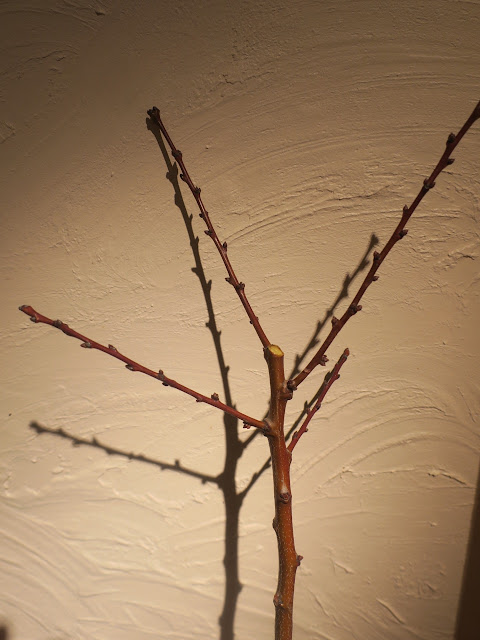 First I needed to create a 'Y' shaped 'cross-bar fixture', for which I used the end of a branching stem from the apricot tree. 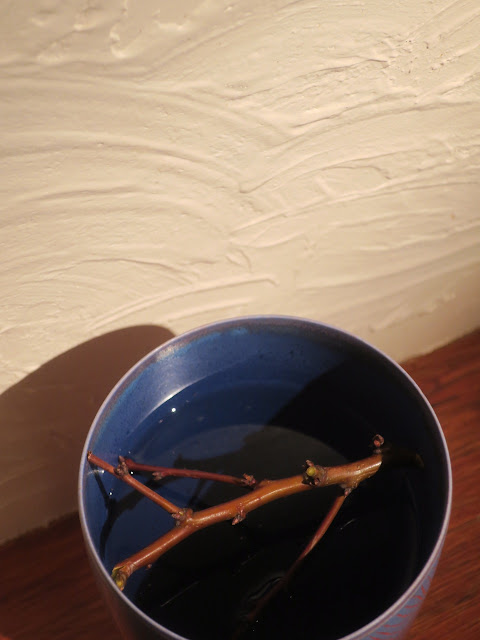 Here it is carefully wedged across the inside of this fairly thin-walled vase. This system should never be used with heavy stems, because of the inherent risk of breaking a thin-walled vase when wedging the cross-bar. By leaving some of the side branches I was able to support the principal stems within the triangle created on the left hand side. 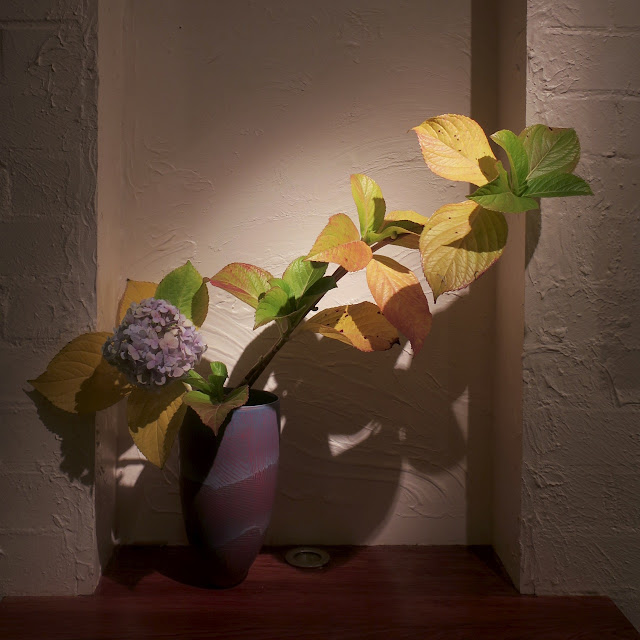 Here is the completed arrangement in the niche in the living room. Not a good photograph because of the shadows created by the spotlighting. 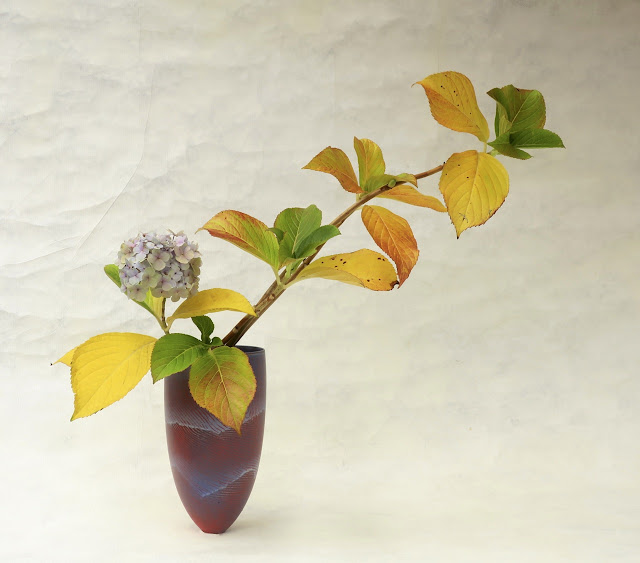 This version on a white background worked better. The vase is by the Western Australian ceramic artist, Pippin Drysdale.

You may also like to look at the photos from Tuesday's Ikebana International meeting.

Much of this last week has been taken up with the annual exhibition of the Sogetsu School of Ikebana Victorian Branch. This year our exhibition is being held in the foyer space of the Hawthorn Arts Centre, a community Arts Hub that has been created in one of the old Town Halls remaining after the amalgamation of smaller suburban city councils in 1994.

As the Director of the Victorian Branch I am indebted to many of my ikebana colleagues, especially those who have given their time and talents to represent the great variety of individual styles inherent in Sogetsu Ikebana. Their names are to be seen with their ikebana under the Annual Exhibitions tab on our website. Lara Telford provided an engaging and informative public demonstration at the official opening. I also need to acknowledge the assistance of the senior curator Ms Elle Groch and the Arts Centre staff. Additionally I particularly wish to acknowledge Kaye Wong, Head of the Ichiyo School, for her organisational skills in arranging the delivery of the plinths following re-painting. Lastly, thanks to Robyn Unglik for her calm management through the unexpected difficulties of building maintenance activities in the exhibition space.

Now specifically to my ikebana. In the week immediately prior to the exhibition I suddenly threw out my previous ideas when I noticed that the apricot tree in the garden needed to be pruned. I immediately realised that these beautiful branches were perfect for a freestanding 'no kenzan' arrangement. 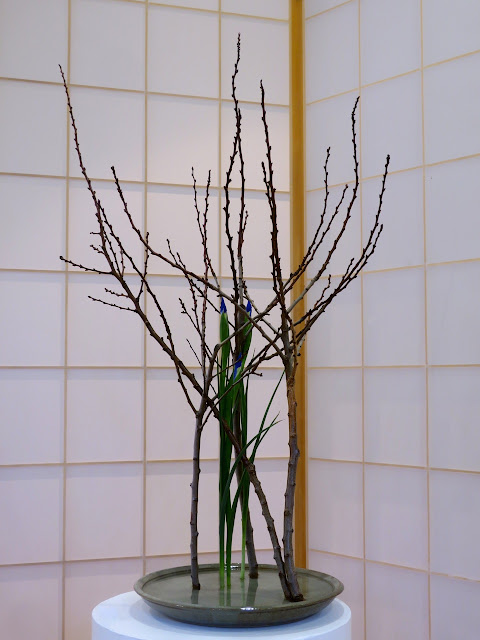 Being winter here, dutch iris are available and they have tall enough stems to be supported by the high intersecting branches. At the beginning of the exhibition the blue tips of the flowers were visible, promising something for the future. 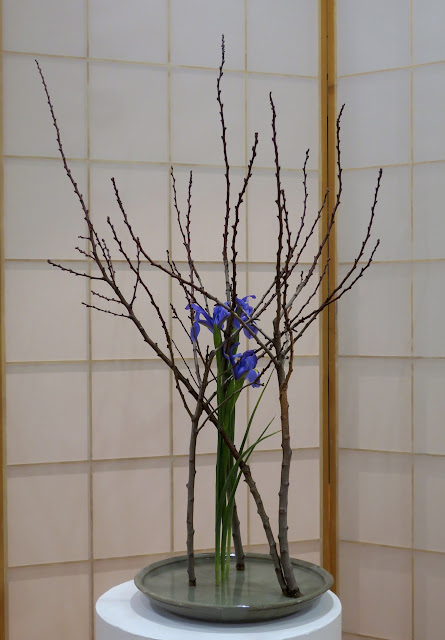 Three days later the flowers were fully opened, declaring their beauty to the world.

If you haven't already done so I recommend following the link to the Annual Exhibition of the Victorian Branch of the Sogetsu School of Ikebana.

Posted by Christopher James at 6:00 PM No comments:

Over the last couple of weeks I have noticed flowers forming on the newly planted Senna artemisioides. It is native to Western Australia and areas of the centre of Australia. It is said to be wide-spread across the continent. However, it is another plant that I have not seen before, at least not in a suburban garden.

The flowers remind me of the highly fragrant Brown Boronia boronia megastigma. Both plants have small bell-like flowers, although Senna artemisioides seems to have five petals against four in Boronia. 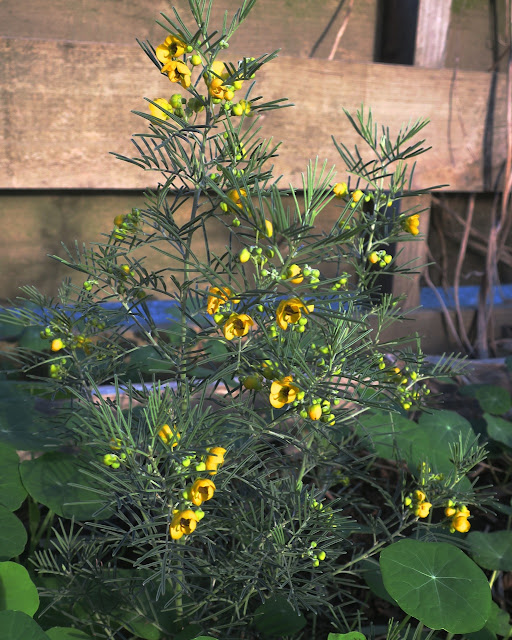 This plant was given to me by my ikebana friend, Trish, along with the 'Drumstick' flower, Isopogon cuneatus that I reported on three weeks ago. I am pleased to observe that it has started flowering about a month ahead of the acacia baileyana that grows along the garden path. I wonder whether this will become a seasonal pattern.

We have just entered winter, with the autumn being declared the driest on record in many places. It certainly seems so in our garden.

Last weekend the Victorian Branch of the Sogetsu School welcomed Mr Yoshiro Umemura on his annual visit from Sydney to give workshops to our members. Mr Umemura is the most senior and experienced Sogetsu teacher in Australia. He studied Sogetsu ikebana in Japan and subsequently worked for many years alongside Norman Sparnon in Australia.

The theme of his first workshop was to create an arrangement in which a triangle, circle and square are incorporated. 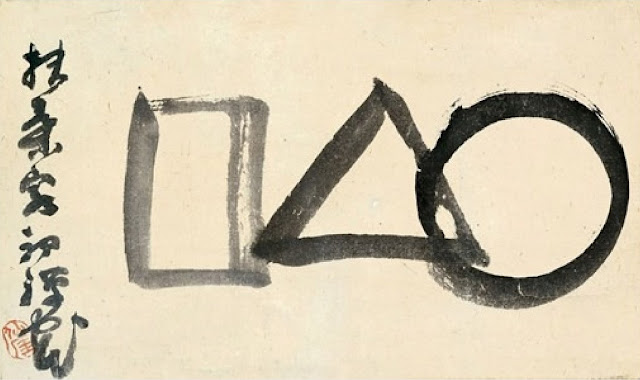 These geometric symbols were used in ink brush painting by the 18th century Zen Buddhist monk, Sengai. Their symbolic value includes that they can be read as a representation of the universe. 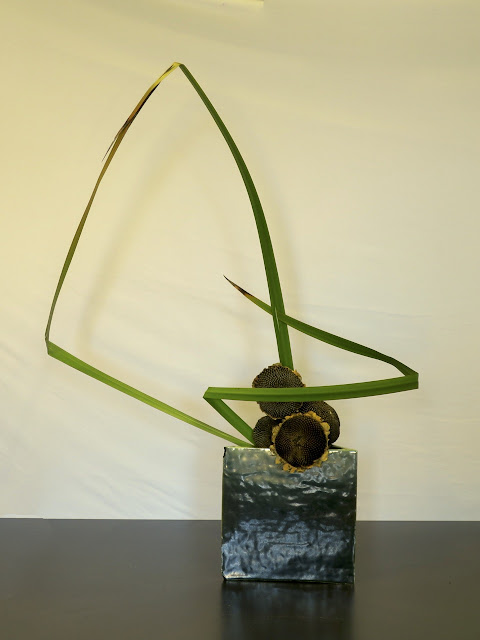 This is my work in which I have made triangles with coastal sword sedge, used five dried sunflower heads for their circular shape and arranged them in an almost square vase.

On the Australian Sogetsu Teachers Association, New South Wales Branch website there is a page showing an excellent example by Mr Umemura of this exercise. It is the sixth photo on that page.

The second workshop was to make an arrangement expressing an emotion. 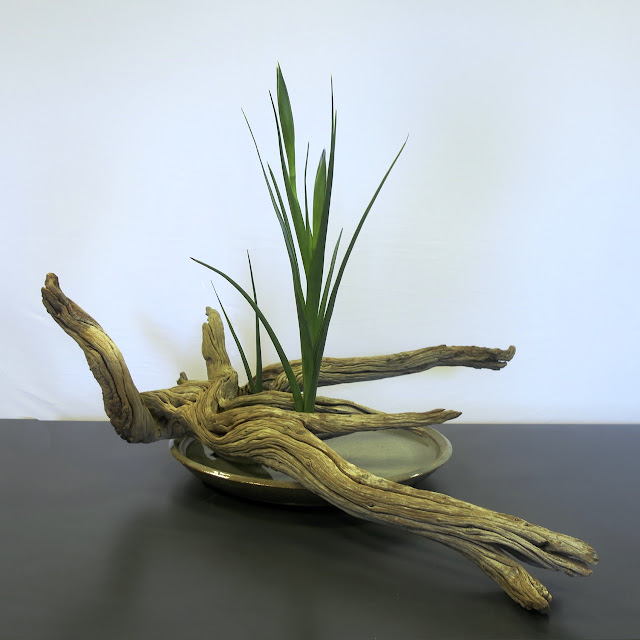 The emotion I chose was calmness or serenity. I have placed a large branch of driftwood across a celadon-glazed platter and added some blue Dutch Iris, iris x hollandica. They are held in place by the driftwood so that no kenzan was necessary and the surface of the water remained clear.

More photos from the workshops are on the Victorian Branch website.

On Monday 4th June the Branch is setting up its annual exhibition at the Hawthorn Arts Centre. If you are in Melbourne please visit the exhibition; see the information below. 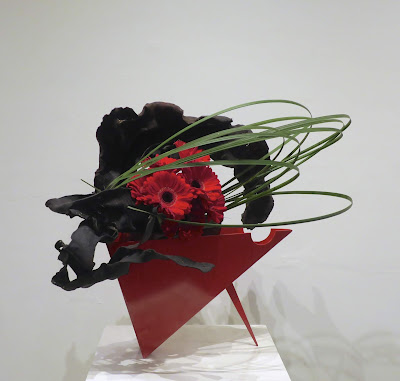 Posted by Christopher James at 10:28 PM No comments: