I have spent more time in Melbourne than usual lately, so when I came back to Torquay I noticed some developments in the garden. In particular, this week I noticed that some of the later winter-flowering plants have come into bud... 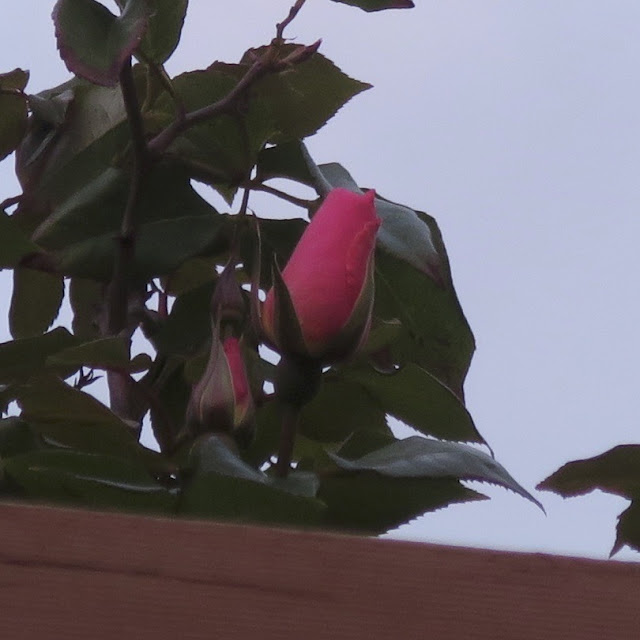 ... including the climbing Lorraine Lee rose on the pergola. 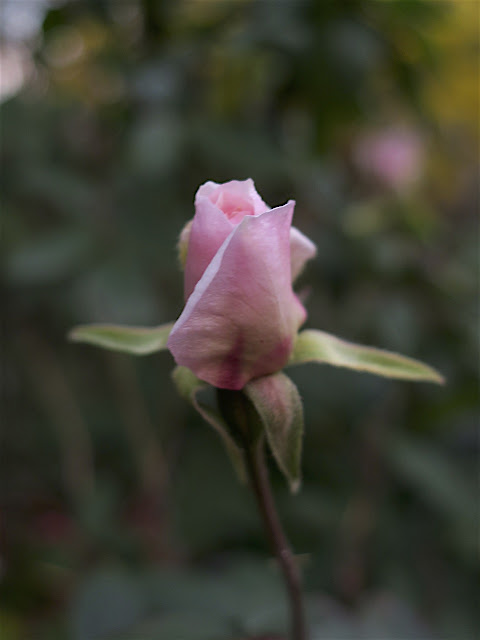 The Cecile Brunner, whose 'parent' plant was given to me nearly 50 years ago by Mr Romney, the father of a dear friend. This was grown from a cutting taken from my family's garden. 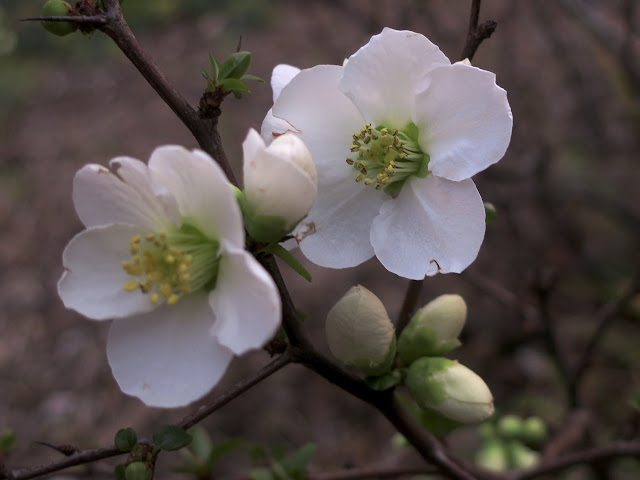 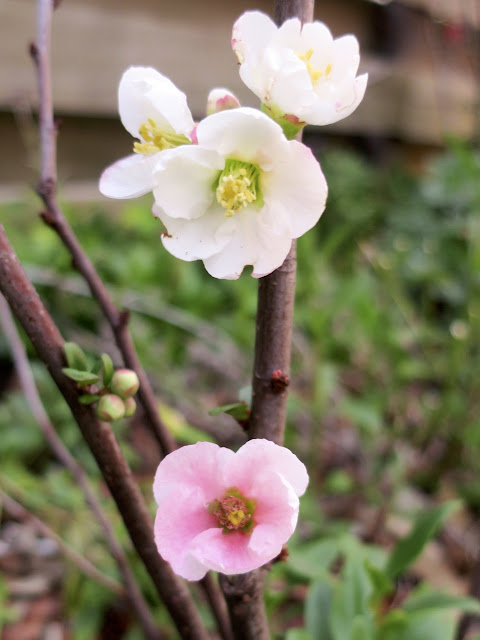 Former work colleague, Shirley Meyer, gave me this 'Apple Blossom' variety of Japanese Flowering Quince only a couple of years ago. I was amazed at the colour difference between these flowers on the same stem. 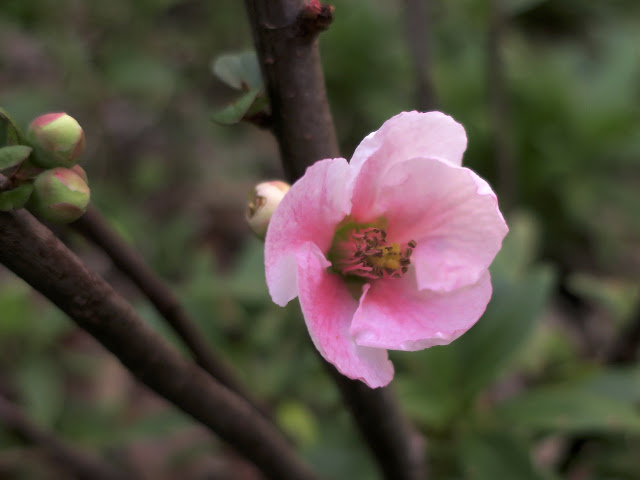 Close up of the rich pink. 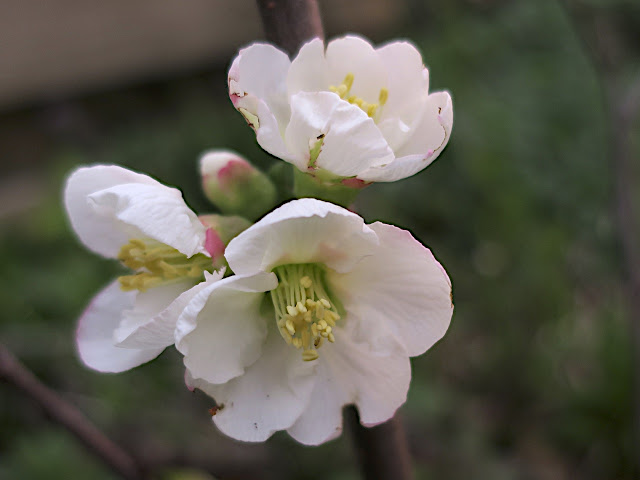 Much paler flowers on the same stem. 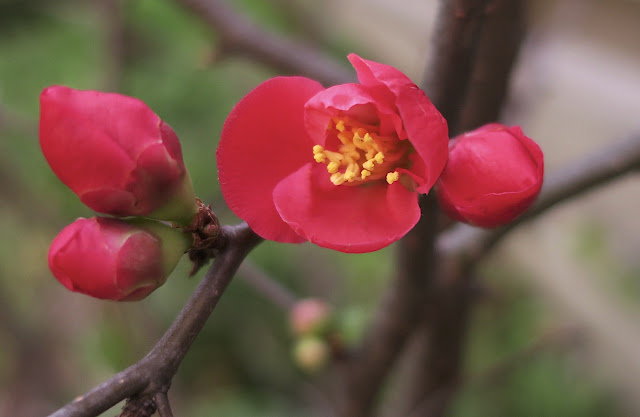 This flower is on a cutting from my own original red Japanese Flowering Quince. 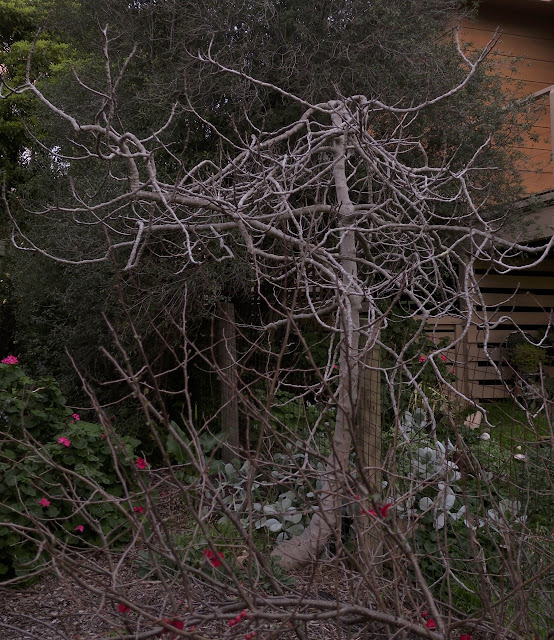 This fig tree, grown from a cutting taken from my parents' garden, shades our kitchen window from the western sun in summer. It was getting just a little too tall to pick fruit easily. So, recently, I cut the top off, also hoping that this would encourage lateral growth of the upper branches. Time will tell.

The reason for spending time in Melbourne was to curate and set up the annual exhibition of the Victorian Branch of the Sogetsu School of Ikebana. When thinking about my own ikebana to go into the exhibition, I realised that the lines of the fig would make a good subject. As the branch was quite large and spreading, I decided to try fixing it in a large cylinder made by Graeme Wilkie of Qdos Gallery in Lorne. The mechanics of securing the branch were not complex but needed to be very sturdy. I created a 'vertical fixture' from a length of milled timber, that could reach down to the bottom of the vessel, which I attached to the branch with two screws so that it could not rotate. I then added some small stones to give additional ballast to the vase. I was not sure what to put with it, but found some beautiful banksia flowers that had a great colour harmony with the unusual matt olive green glaze of the vase. 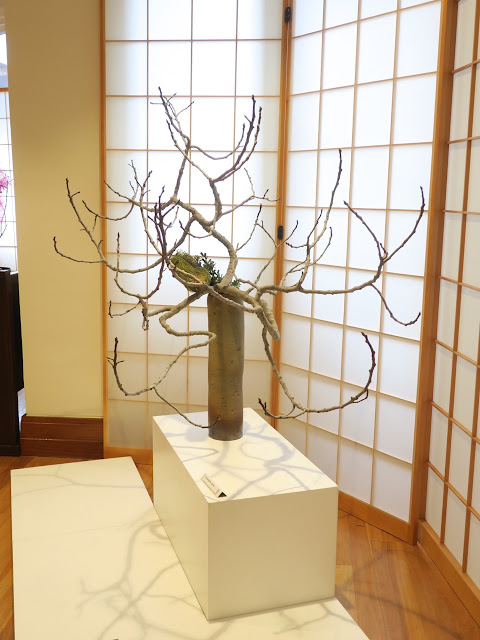 The ikebana proved very hard to photograph because of the flattening effect of the photograph. I took this photograph from the side to show that the ikebana is more than a metre deep. 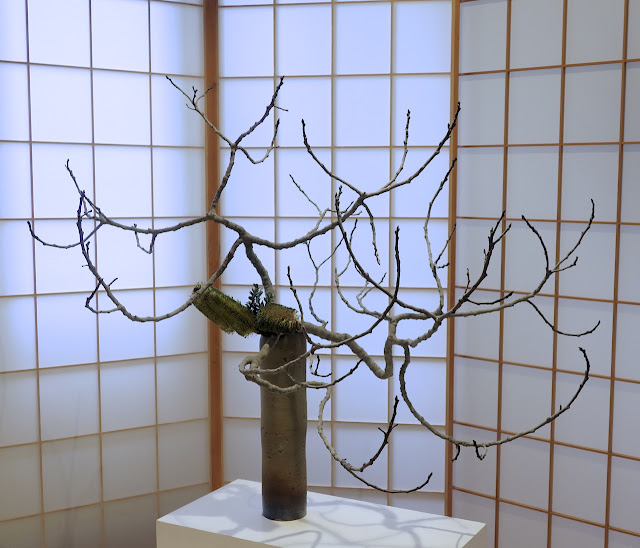 From the front this photo shows the interesting lines of the fig. As a subject for ikebana these bare branches reveal their shape normally covered by large leaves. The small buds at the tips suggest the promise of spring yet to come.

Click here for more photos of the Sogetsu Branch Exhibiton.

THE MOON WAS A GHOSTLY GALLEON *

On Tuesday evening last week I went for a walk along the beach and was delighted to see the full moon rising above a bank of quite dark clouds. The wind was fairly strong and there was rain out to sea which was moving away along the coast. 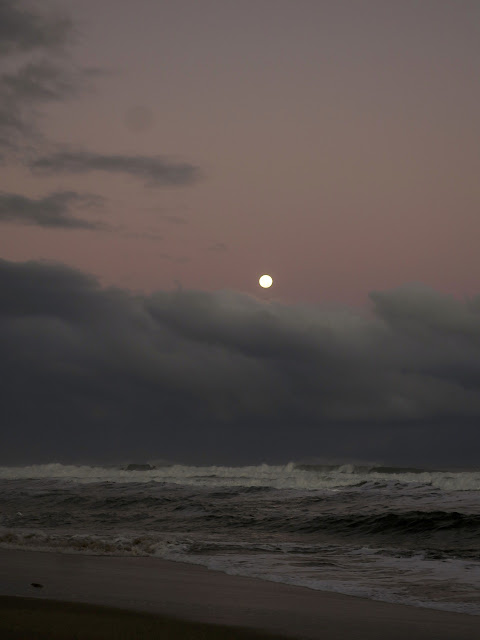 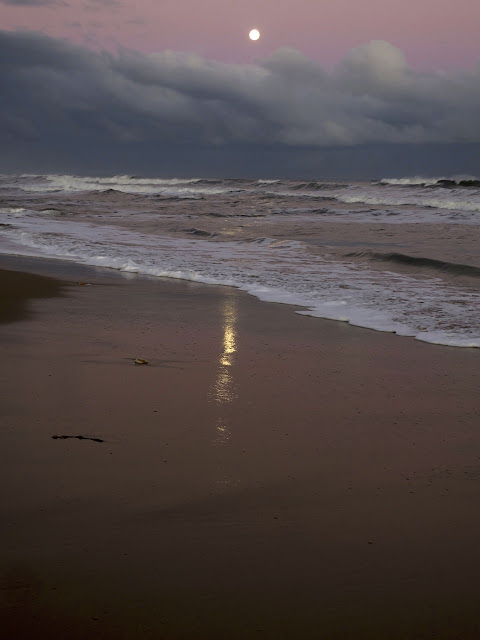 As the moon rose higher I noticed its reflection in the wet sand and on the surface of the water. 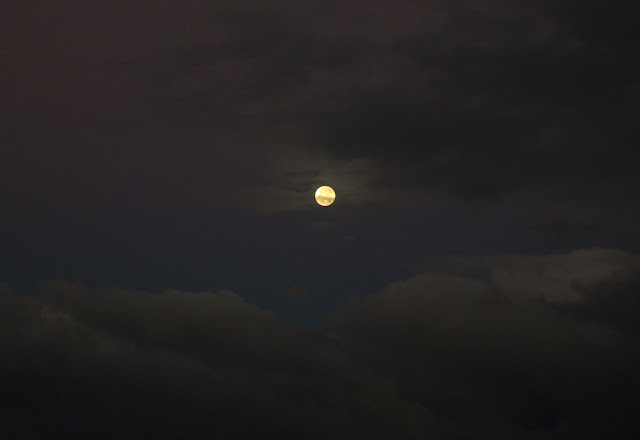 The moonrise was quite a beautiful sight even as it became partially veiled by cloud.

Of course, there has been a lot of media attention this past week given to the 50th anniversary of the Apollo 11 moon landing. The forward-looking senior curator at the Geelong Art Gallery has created a fascinating exhibition looking at The Moon as represented in art works from a number of different perspectives. After attending the opening of the exhibition, watching TV programs about the Apollo 11 expedition and seeing the beautiful moon rise, my mind was full of these images and ideas. I thought it was an appropriate opportunity to use a crescent moon-shaped ceramic ikebana vase. 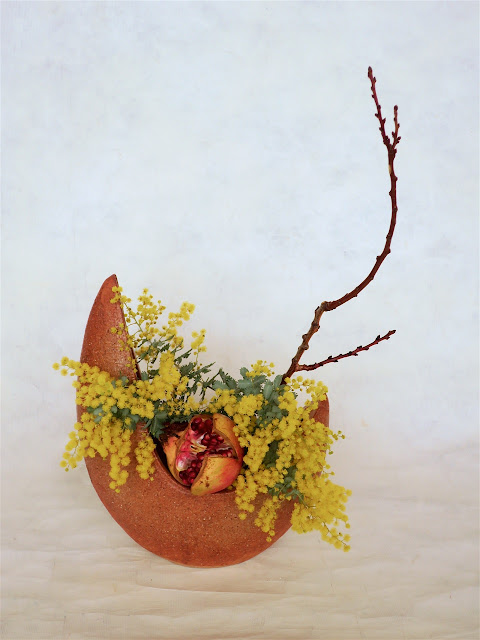 The materials are Acacia baileyana, an over-ripe pomegranate that has split open and a branch of apricot. I think my ikebana looks unexpectedly abundant for a winter arrangement. Such is the joy of our acacias that start to flower at this time. I was particularly pleased that the curve of the branch echoed the profile of the vase.

On Saturday 13th July I attended an Ikebana International workshop in Melbourne led by my colleague Chieko Yazaki, the Melbourne branch head of the Shogetsudokoryu school. The theme of Chieko's presentation was ikebana using aspidistra leaves. As the blue highlighted link will show you these leaves are highly regarded as an ikebana material and particularly used in the creation of seika arrangements.

Chieko's demonstration included a variety of techniques for using and manipulating aspidistra leaves which can be seen on this link to the I.I. blog. 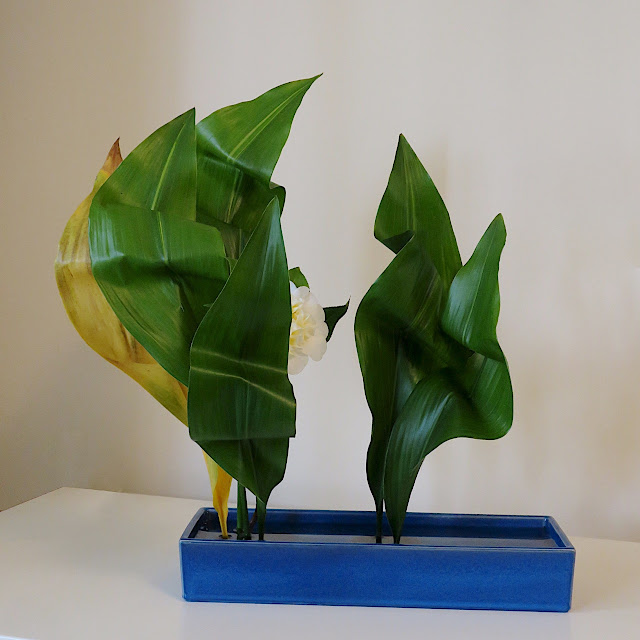 This is my arrangement from the workshop that I re-set at home. I have used five fresh leaves from our garden and one that was turning yellow. In the space between the two groups a white camellia is peeping from the left hand side. I really like the sense of movement which has been created in this ikebana. The leaves have been manipulated into folds by taping wire to their backs.

* From The Highwayman by Alfred Noyes

Posted by Christopher James at 10:45 AM 2 comments:

SPOILS FROM A WINTERY GARDEN

Do you remember Sunday 7th July? Something strange happened on that day and Roadside Ikebana failed to publish the post I wrote. Well here it is, my apologies for the silence.

Winter in the garden is time for a number of annual tasks including pruning and spreading mulch to settle down a bit before the summer comes around. This year I have also managed to pot-up a couple of plants for ikebana friends. Both the red Japanese Flowering Quince, Chaenomeles Japonica, and the tall Nandina domestica have sent out suckers beyond where I want them growing. So it has been an easy decision to lift them and give them away. 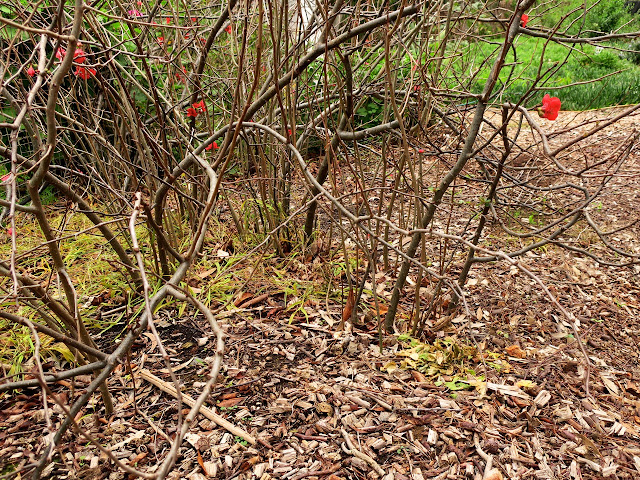 Here you can see the spread of the Flowering Quince... 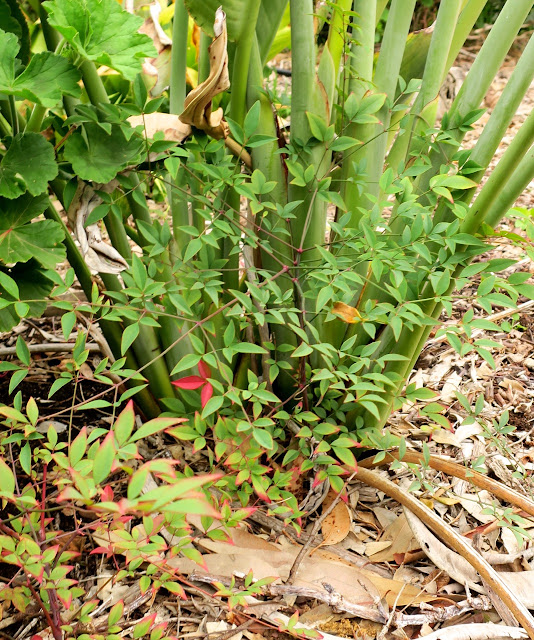 ...and this nandina has come up among the stems of a strelitzia.

A couple of months ago I cut the top off our Cootamundra wattle, Acacia baileyana, because it was looking rather ragged. I had earlier identified borer holes at some branch junctions with the trunk. Unfortunately, this tree was seriously stressed by our very dry summer, making it more vulnerable to insect infestation. This is a short-lived small tree under the best of circumstances and I doubt that it will survive much longer. I think the pest is the same one that infected the Casaurinas in the front garden a few years ago, which have now been removed.

Today I decided to remove a Correa, a small native shrub, by the garden path as it looked to be suffering the same fate. 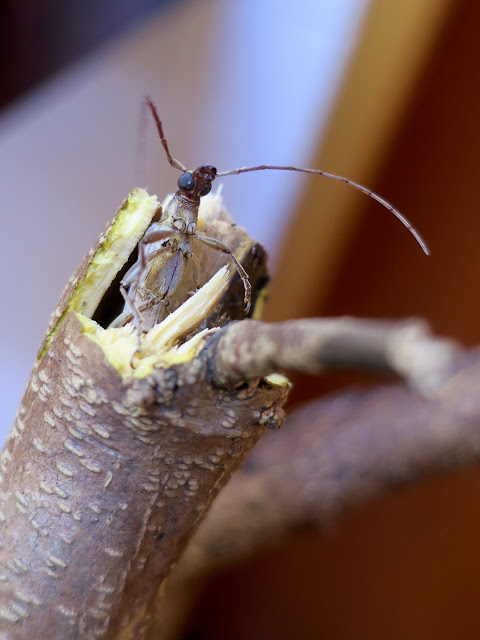 Then the proof. I admit to being a bit horrified when I snapped this stem and found a winged insect inside. I think it is a Long-Horned beetle (Family, Cerambicydae). I promptly removed all of the plant and removed the prunings from the garden.

On a more cheerful note, the very hardy and much loved Rosemary is flowering prolifically just now. 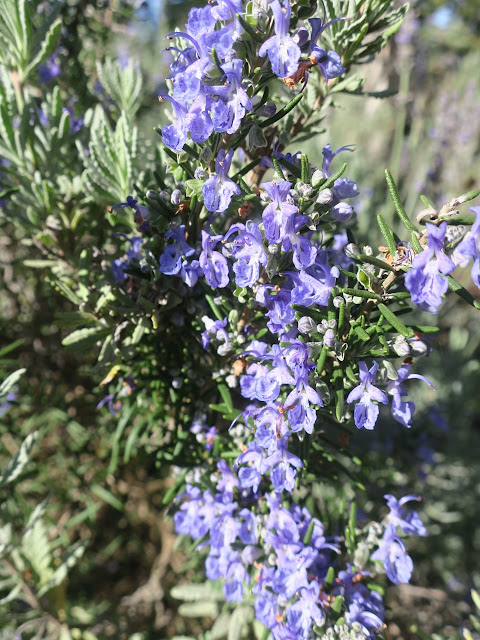 It is also growing beside the garden path along with one of the lavenders. 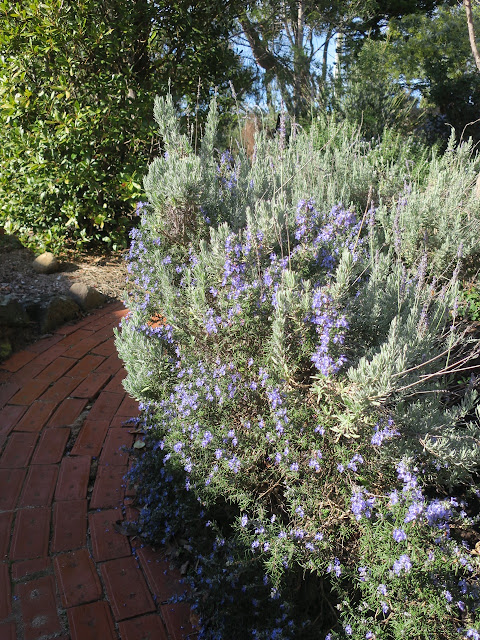 Here you can see the two plants rather intermingled. To the right of this photo I have recently replaced one of the Cecile Brunner bushes with a couple of small Lavandula dentata plants, which I expect to do better than the rose in the rather dry raised bed. 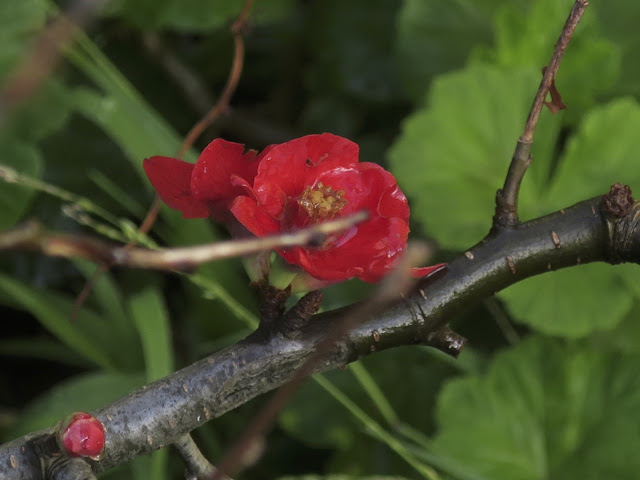 Three weeks ago I showed this branch of Japanese Flowering Quince in the garden, and today I felt there were enough flowers to be able to make a winter ikebana from them. 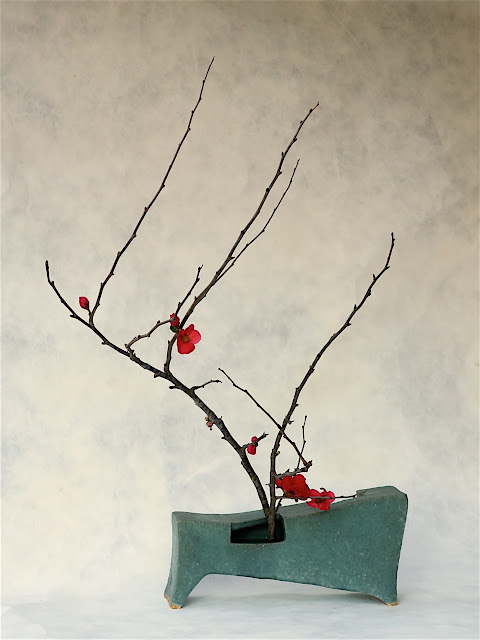 I have used only two branches in this unusual 'modern' ceramic ikebana vessel. I liked the distinct lines of the branches and the small number of intense red flowers. This photo is an interesting example of the flattening effect of photography. Below is the same arrangement from the left hand side. 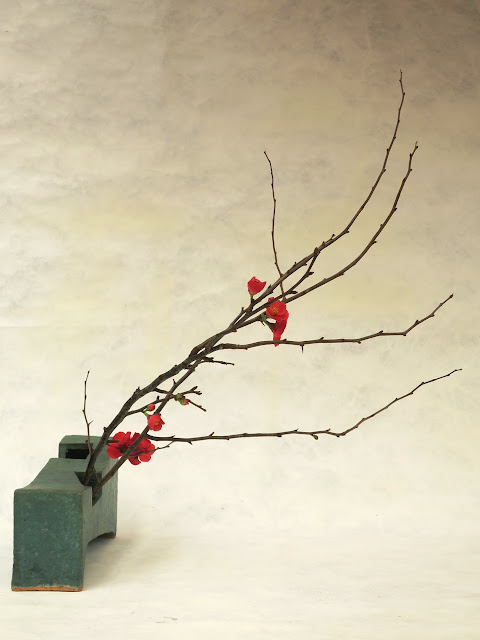 As you can see the whole arrangement leans markedly forward. The result is that the first photo looses the true sense of depth to the work. It is one of those occasions when the 'real life' experience is significantly different to the photograph.

Greetings from Christopher
14th July 2019
Posted by Christopher James at 1:42 PM No comments: